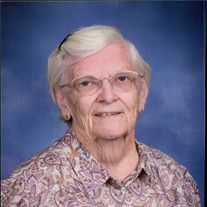 Agnes Helen( Krupicka) Hagenauer passed away peacefully at her home on February 17, 2017. She was a beloved wife, mother, sister, grandmother, great grandmother, aunt and friend to many. Agnes was born in Woodburn on September 2, 1933 to Martin and Mary Krupicka of Hubbard. After graduating from high school she married Donald L. Hagenauer on July 12, 1952. They began their life together and lived at various Air Force bases. Along the way they welcomed eight children into the family. They moved back to Oregon in 1965 where her husband finished his Air Force career. Agnes was a homemaker and she worked various jobs until she retired. She was a newspaper carrier, school bus driver, school cafeteria cook which she retired from. Agnes then volunteered as a Dial-a-Ride driver. Agnes enjoyed working in her garden, her flowerbeds, embroidery, word search puzzles and she loved following the Portland Trail Blazers. She had a deep devotion to her faith. She was a 34 year member of the Catholic Daughters of the Americas. Agnes is survived by her 8 children; Dale(Cynthia) Hagenauer, Debra(John) Murray, Karen Hagenauer, Ron(Kelley) Hagenauer, Pamela(Cary) Webster, Mark Hagenauer, Dennis(Laura) Hagenauer and Donna(Jim) Hostetler. Also surviving are 16 grandchildren and 10 great grandchildren. Agnes was preceded in death by her husband of 61 years, Donald L. Hagenauer, her sister, Lillian Hagenauer, and her granddaughter, Sarah Jayne Webster. A rosary will be held on Friday, March 3, 2017 at 7 P.M. at Simon-Cornwell's in Woodburn. A Memorial Mass will be held Saturday, March 4, 2017 at 10:00 A.M. at St. Luke Catholic Church in Woodburn. A celebration of life and luncheon will follow at St. Agnes Hall in Hubbard. Please direct donations to Catholic Daughters –Court Victory 731 417 Harrison st Woodburn, OR 97071 OR The Knight Cancer Institute 1121 SW Salmon Suite 100 Portland, OR 97205 In memory of Agnes Hagenauer

Agnes Helen( Krupicka) Hagenauer passed away peacefully at her home on February 17, 2017. She was a beloved wife, mother, sister, grandmother, great grandmother, aunt and friend to many. Agnes was born in Woodburn on September 2, 1933 to Martin... View Obituary & Service Information

The family of Agnes Helen Hagenauer created this Life Tributes page to make it easy to share your memories.

Agnes Helen( Krupicka) Hagenauer passed away peacefully at her...