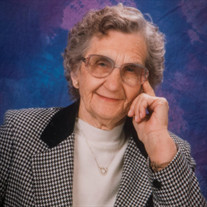 Agnes Marsh 1916 - 2018 Agnes was born at home in Mt. Angel, OR, the third child of seven, to Bernard and Mary Duda on July 15, 2018. She was preceded in death by her six siblings: Sr. Bernarda Duda, OSB; Mildred Bradley (Justin); Walter Duda (Lorraine); Clarence Duda (Dell) and William Duda (Beverly). After graduation from grade school, she helped supplement the family income by working out as a domestic and cannery worker during the lean years of the Great Depression. On January 9, 1941, in St. Mary Church in Mt. Angel, she married Gerald Zollner, also of Mt. Angel. Three of her children preceded her in death including John Zollner (Diane) of Woodburn, OR, along with two infants Joseph and Ruth Ann. She is survived by three children: Nadine Owings (Mike) of Keizer, OR; Therese Lewis (Tom) of Athena, OR; and Bernard Zollner (Catherine) of Woodburn, OR, along with 22 grandchildren, 42 great grandchildren and 2 great great grandchildren. Agnes and Gerald lived in the Mt. Angel area for many years before moving to Woodburn. Agnes was the perfect farmer's wife taking care of the home, raising kids , growing an enormous garden and helping out wherever it was needed. She was always the fastest picker in Gerald's berry patch. Along with all this, she cooked the meals, mowed the lawn, and treated her kids, nieces and nephews to daily-baked-bread, homemade sauerkraut and crock dills all summer long. After Gerald's death in 1974, she and sons John and Bernie continued managing the farm until her marriage to Gabriel Marsh on February 2, 1980. She moved to Salem with him where she enjoyed her growing family of stepchildren (Dan, Joann, Jerry, Rhea, and Betty) along with their spouses, kids and grandkids. They lived in Salem until Gabe's death where she continued to live near church and her younger sister Veronica. During this period of her life, she quilted a multitude of blankets many of which went to charities or family. She particularly loved making baby quilts. She later moved to Woodburn where she spent her final years close to family and friends. She died peacefully in her sleep on July 22, 2018, with family by her side. Rest In Peace Child of God

Agnes Marsh 1916 - 2018 Agnes was born at home in Mt. Angel, OR, the third child of seven, to Bernard and Mary Duda on July 15, 2018. She was preceded in death by her six siblings: Sr. Bernarda Duda, OSB; Mildred Bradley (Justin); Walter... View Obituary & Service Information

The family of Agnes Hedwig Marsh created this Life Tributes page to make it easy to share your memories.