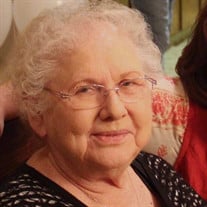 Alice Samaduroff Eagles was born on January 26, 1942 to Moises and Maria Samaduroff in Mexico in the car on the way to the hospital. The first of 4 children Daniel, Peter and Fenya, she grew up in a household with her parents and grandparents. She was proud of the fact she was spoiled rotten! When she got into trouble, she would run to her Babunia and hide behind her skirts. Her dad could never tell her “No”. Alice’s mom would fix her hair into French braids for many reasons. One was to keep her hair out of her way of course. A little tug of the braid would remind Alice what not to do. When she was about 5 years old, Alice was playing with or irritating their German Shephard, Pancho. Pulling on his ears, and being “spoiled” Pancho had had enough. He grabbed one of her braids, yanked it a few times (just like mom did) let go and walked away. Babunia couldn’t tell this story without laughing! She went to school in Mexico, but on her first day found out that she had to learn Spanish in order to attend. At age 12, she moved to Los Angeles to live with her Uncle Jack and Aunt Anna. She attended school in East LA where she learned English. At age 15, she met Allen Steven Eagles and was swept off of her feel! They married on October 4, 1959. Alice and Allen had 3 children Manya, Natasha and Moses, 8 grandchildren and 1 great grandchild. In June 1978, the family moved to Woodburn, OR. Alice worked at Birds Eye canary for a few years before she was hired to work for the Monitor School District. She worked with both the Spanish and Russian speaking students. After 28 years with the school, she retired in 2005. Alice loved cooking, gardening, music, movies camping, bbq-ing and entertaining family and friends. The door was always open and all were welcome. Alice fought against cancer several times but couldn’t win this last battle. Her passing leaves a huge hole in many, many lives. She was proceeded in death by Allen in 2000. Please join me in reciting Alice’s favorite bible verse, the 23rd Psalm.

Alice Samaduroff Eagles was born on January 26, 1942 to Moises and Maria Samaduroff in Mexico in the car on the way to the hospital. The first of 4 children Daniel, Peter and Fenya, she grew up in a household with her parents and grandparents.... View Obituary & Service Information

The family of Alice Eagles created this Life Tributes page to make it easy to share your memories.