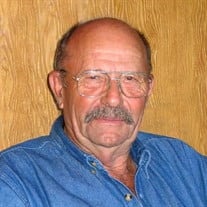 Andy Rice January 7, 1933 - April 21, 2017 Andy Rice was born in Neligh, Nebraska in 1933 and was the oldest of seven children. He learned the value of hard work early, driving a tractor for his dad on the farm they called Snug Harbor. At the age of 15 he and his family moved to Woodburn where he enjoyed playing football and met his sweetheart, Alice Baglien. Alice and Andy were married in 1951 and had three daughters. He built their three-bedroom house from the foundation up, completing most of the details himself—from expertly finishing all the woodwork, to hand-splitting the cedar shakes for their roof. He completed the home in 1966 and happily resided there for the rest of his life. Andy began training as a timber faller at the age of 17 and continued working in the woods for the next 37 years, packing a heavy chainsaw up and down the rugged slopes of the Cascades. In his last decade of logging he developed an interest in honeybees and eventually went into beekeeping full time, pollinating fields across the Willamette Valley and selling "Rice's Pure Raw Honey" from his home. Andy was a man of many talents and interests. He was well known for his wood working skills, creating beautiful custom gunstocks for family and friends. He loved gardening and used the bounty of his efforts to can homemade salsa and create a dinner specialty he called "Barn-Burner," a dish so spicy with hot peppers it made your head steam. After the loss of his beloved wife Alice, he turned his gardening interests to roses, and planted over 100 different varieties, all of which he could identify by name. A visit to his house in the summer usually meant a tour of the roses—walking the "back 40," hearing about which were his favorites, and picking a fragrant bouquet to take home with you. Missing the traditions of his Norwegian bride, he later picked up lefse making. He volunteered at Immanuel Lutheran Church, making lefse each fall for their annual bazaar. He soon owned his own potato ricer and could roll out large, thin lefse that would make any Norwegian proud. Along with his skilled handiwork, Andy was incredibly smart. He loved reading and had a memory for historical facts that was beyond most. He subscribed to multiple news magazines, loved politics, and could debate with the best of them. He was admired for the ability to pull even the most obscure historical fact from the recesses of his brain to make his point. He had a quick wit and was fondly appreciated for his original ways of describing the quirky experiences of life. Andy was a man of integrity and dedicated to doing right by others. Simply put, he enriched the lives of anyone who had the good fortune of knowing him. He was a genuine treasure and will be greatly missed.

Andy Rice January 7, 1933 - April 21, 2017 Andy Rice was born in Neligh, Nebraska in 1933 and was the oldest of seven children. He learned the value of hard work early, driving a tractor for his dad on the farm they called Snug Harbor. At... View Obituary & Service Information

The family of Andrew Franklin Rice created this Life Tributes page to make it easy to share your memories.