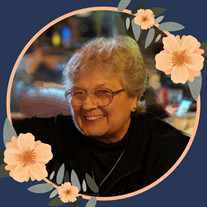 Anna Lorraine Holdahl, 86, of Wilsonville, Oregon, passed away on October 28, 2021, surrounded by loved ones. Lorraine was born in Mott, North Dakota to Wilbur and Anna Nelson on June 4, 1935. Her family eventually settled in Lemmon, South Dakota where Lorraine attended school and graduated from Lemmon High School. After high school, she became a switchboard operator. On June 26, 1955, she married the love of her life, Lyle Holdahl. In 1966, they packed up their growing family and moved to Oregon. Lorraine worked for Wilsonville School District for several years as a teacher’s assistant while raising six children and caring for her home. She also played a part in raising two of her nieces and two of her grandchildren. Later in life, she enjoyed traveling throughout the United States with her husband. They enjoyed 47 years of marriage until his death in November of 2002. Lorraine often filled her time with birdwatching, gardening, and crafting. She will be remembered for her handmade cards. Each one was a work of art created specifically for its recipient and signed - handmade with love. Lorraine is preceded in death by her parents, husband Lyle, sisters: Bertha, Betty, Helen, Marjorie, and Susan, and brothers: Sonny, Johnny, and Art. Lorraine is survived by her four sons: Lyle, David, Jerry, and Mark, and two daughters Lynnette and Lori (Kathy); her sister Shirley (Joe) and brother Robert (Patty); three grandchildren: Matt (Tiffany), Mandie (Jonathan), and Brittany; five great-grandchildren: Bradyn, Jacob, Charley, Anna, and Abram; and numerous nieces and nephews. Lorraine was a devoted wife, mother, and friend. To know her was to love her. Although our hearts are heavy, we will celebrate her life and find comfort that she is with the two people she loved most, Her Savior and her husband.

Anna Lorraine Holdahl, 86, of Wilsonville, Oregon, passed away on October 28, 2021, surrounded by loved ones. Lorraine was born in Mott, North Dakota to Wilbur and Anna Nelson on June 4, 1935. Her family eventually settled in Lemmon, South... View Obituary & Service Information

The family of Anna Lorraine Holdahl created this Life Tributes page to make it easy to share your memories.