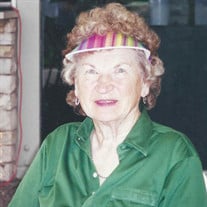 Mrs. Anna (Anne) Marie Woehler (Ogden), of Woodburn, OR. passed away from this place and into Jesus' arms on Wednesday, Nov. 27, 2019 at the age of 93. Anne was born to parents Peter and Barbara Borschowa (Huber) on March 4, 1926 in Mt. Angel, OR. She was born into a large family. In 1943, she married Ernie F. Ogden of Gervais, Oregon. They moved from Oregon to Southern California in 1949 where they raised their family of three children. She worked for The Goodyear Tire & Rubber Company plant in the Watts area of Los Angeles. She was secretary to the plant's Industrial Products Superintendent. She commuted 20 miles daily from their home in Bellflower, CA. She was diligent and faithful in her work. Due to Ernie's severe birth defect, a heart problem, Anne was the primary wage earner for the family until her retirement in 1981. A very loving mother and avid golfer, Anne was especially thrilled with her three hole-in-one achievements. She enjoyed the occasional visit to the casino and loved her bingo. She created friendships that lasted her lifetime. She lived and died as a faithful Catholic and a member St. Luke's Parish in Woodburn, OR, even after she could no longer commute. Ernie died in 1973. Anne --married Edward Woehler in 1979. Ed died of cancer in 1997. After a few years, Anne moved back to Oregon and settled in Woodburn, OR., near her hometown of Mt Angel, where she lived the remainder of her life. Anne is survived by her daughter Linda McLaughlin, of Woodburn, sons Gene of Cassel, California and Edward Ogden of North Canton, Ohio; her brother, Jerry Borschowa of Hubbard, Oregon and six grandchildren, Michael, Tony, Sydney, Emily, Christopher and Taylor. She was preceded in death by her husbands, Ernie and Edward and her parents, Peter and Barbara Borschowa; her sisters, Barbara, Eva, Mary, Rose and Stephania; and her brothers, Michael, Peter, Joseph, Jacob and Stephan along with several nieces and nephews. Anne was cremated as was her wish and interment will be at Mt Angel Catholic cemetery, Mt Angel Oregon. Friends and family are invited to attend her Catholic Mass and Reception afterward at St. Luke's Catholic Church in Woodburn, OR on Jan. 17, 2020 at 11am PST. The family is grateful for condolences. Flowers are welcome.

Mrs. Anna (Anne) Marie Woehler (Ogden), of Woodburn, OR. passed away from this place and into Jesus' arms on Wednesday, Nov. 27, 2019 at the age of 93. Anne was born to parents Peter and Barbara Borschowa (Huber) on March 4, 1926 in Mt. Angel,... View Obituary & Service Information

The family of Anne Marie Woehler created this Life Tributes page to make it easy to share your memories.