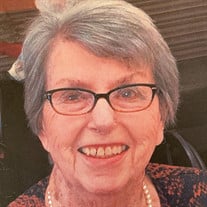 In Loving Memory Arlene Maher Weekly April 1, 1926 – July 1, 2019 Arlene was born in Bemidji, Minnesota, to Iona and Lloyd Maher. The oldest of four girls, she grew up on the Red Lake Indian Reservation, where her father worked at the Redby sawmill. After her school burned, she moved into Bemidji to live with an aunt and uncle and finished high school and secretarial schooling there. That move was pivotal to her future. When two of Arlene’s uncles moved West at the end of World War II, she went with them: first to Salt Lake City, then the Bay Area, and finally Eugene. In Eugene she made lifelong friends, and met the love of her life, Norman Weekly. On Sept. 13, 1958, Norm and Arlene were married at St. Mary’s Episcopal Church in Eugene. Arlene worked as a bookkeeper for many years, for JH Baxter & Co and Willamette Industries in Eugene, and later at Norm’s insurance office in Portland. Arlene and Norm were blessed with three children, and four grandchildren: son, Chris, a Jesuit priest; daughter, Katie (Jeff) Jones, their children Trent and Anna; son, Brad (Betsy), their children Keelin and Jack. She loved being a Mom and Grandma “Nini,” and her sewing machine, kitchen and flower gardens were among her favorite places. She loved reading all kinds of books. Over the years, she skied and golfed with family and friends and traveled with Norm. With an eye toward retirement, Arlene and Norm moved to Charbonneau in 1993. They were active in St. Francis of Assisi Episcopal Church, a community important to their lives. When Norm’s dementia worsened, they moved to nearby Springridge in 2014. After Norm’s death in 2017, Arlene continued to live there, in Springridge Court. In May 2019 Arlene’s health grew more fragile. The family is grateful to Springridge and Legacy Hospice, which enabled her to live out her days at home. On the evening of July 1, with her children present, Arlene gently passed from this world, drawn forward by the hope of being with Norm again. Arlene’s Memorial Service will be held at 11:00 a.m., Thursday, July 25, 2019 at St. Francis of Assisi Episcopal Church in Wilsonville. A reception follows, with private inurnment in the parish’s Memorial Gardens. In lieu of flowers, the family suggests a gift to St. Francis of Assisi Episcopal Church for care of the Memorial Gardens.

In Loving Memory Arlene Maher Weekly April 1, 1926 &#8211; July 1, 2019 Arlene was born in Bemidji, Minnesota, to Iona and Lloyd Maher. The oldest of four girls, she grew up on the Red Lake Indian Reservation, where her father worked at the... View Obituary & Service Information

The family of Arlene Maher Weekly created this Life Tributes page to make it easy to share your memories.