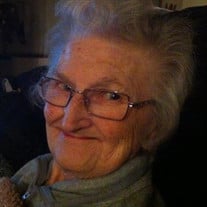 Arvis Rosetta Wampole April 25, 1930 – November 18, 2017 Arvis Rosetta Applegate Wampole was born April 25, 1930 in Corwith, Iowa to Clifford & Anna Mae (Olson) Applegate. As a child, Arvis moved to Burbank, California and in 1944 to Woodburn. Arvis graduated from Woodburn High School in 1949 and went on to attend local post-secondary education. On April 4, 1959, Arvis married the love of her life, Charles Lester Wampole, Jr. The couple made their home in the Woodburn area for the next 40 years. Their marriage was blessed with 3 children, Gary Wampole, Anita (Wampole) Dearden, and Kevin Wampole. Arvis spent her working career as a Secretary and met Charles while working at Birds Eye. After her secretarial career, Arvis retired and stayed home to raise her children and later babysat her grandchildren. Arvis was a member of the United Methodist Church of Woodburn for over 60 years and spent much time volunteering until she was unable due to health reasons. Arvis was preceded in death by her parents, beloved husband Charles, and sibling Ruth Marie (Chapin). She is survived by her children Gary Wampole (Kathy) of Willamina, AnitaDearden (Ron) of Portland, and Kevin Wampole (Danita) of Silverton; Grandchildren: Raina Tharpe (Tim), Kari Wampole, Katlin Beachy (Spencer), Tristan Wampole, and Ethan Wampole, Sarah Heap, Katherine Club, TorrenceLeftridge, Natasha Durant; Great-Grandchildren Emery, Teagan, Corban, Savannah and Livvy; and as well as several nieces, nephews and cousins. Viewing will be Saturday, November 25, 2107 from 8:30am to 10:00 am at SimonCornwell Colonial Chapel in Woodburn followed by graveside services at 10:15 am at Belle Passi Cemetery. A Celebration will follow. Donations may be made in Arvis’ name to the Leukemia & Lymphoma Society.

The family of Arvis Rosetta Wampole created this Life Tributes page to make it easy to share your memories.