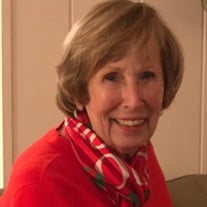 Barbara Joan Nichols, 81, passed away peacefully with family by her side, on Wednesday, September 2nd after a short battle with cancer. Barbara was born to Dorothy and Wallace Garrett on August 14th, 1939 in Highland Park, Michigan. She was an adored only child. After graduating from Cooley High School, she attended Michigan State University, graduating in 1960 with a degree in History. She was a member of Alpha Chi Omega sorority, and had many wonderful memories of the time she spent in East Lansing. After her marriage, Barbara moved to Oregon in 1965, with her husband and their daughter, Dawn Lynn. They settled in Lake Oswego, and their son, Douglas, was born in 1970. After her divorce, Barbara married Larry Nichols in 1979, and they continued to live in Lake Oswego until 1996, when they moved to Wilsonville. Barbara taught Language Arts, Social Studies and Publications at Lake Oswego Junior High School before retiring in 1997 after 30 years of teaching. During those years she became a department chair and a mentor of new teachers. She made lifelong friendships among her colleagues and enjoyed countless visits from former students who remembered her as a teacher who genuinely cared about them. She simply loved teaching, and it showed. After retirement, Barbara and Larry spent many happy years travelling. They went on cruises to Alaska and through the Panama Canal, and they loved spending time in Sedona, Arizona, Sunriver, Cabo San Lucas, Mexico, and California. Family was the most important thing in Barbara’s life. She was an amazing mother, proud of both her children, but her true joy in life came with the arrival of her 5 grandchildren. She was their #1 fan, no matter what they were doing. She was never happier than when she was involved in their lives. She sent care packages for every holiday, which often included items that she had lovingly sewn herself. She labored for hours on scrapbooks that were delivered for milestone events. All of her grandchildren feel lucky to have had her as a constant presence in their lives. Barbara was a true friend to many, and her family is very grateful for the support they have received during the last few months. They would also like to thank Pastor John Foss and the Community of Hope congregation for their support. Barbara is survived by her husband, Larry Nichols, daughter Dawn Lynn (Chris) Lanier, son, Douglas (Christi) Nussmeier, and grandchildren Barbara and Chase Lanier and Garrett, Ashlynn and Colton Nussmeier. It is a wonderful tribute to Barbara that her oldest granddaughter and her oldest grandson are both named in her honor. There will be no service at this time. If you would like to make a donation in Barbara’s memory, please direct them to Community of Hope, PO Box 98, Wilsonville, OR 97070 for their “Food 4 Thought” program

Barbara Joan Nichols, 81, passed away peacefully with family by her side, on Wednesday, September 2nd after a short battle with cancer. Barbara was born to Dorothy and Wallace Garrett on August 14th, 1939 in Highland Park, Michigan. She was... View Obituary & Service Information

The family of Barbara Joan Nichols created this Life Tributes page to make it easy to share your memories.