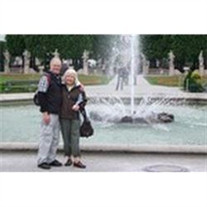 "If you knew her smile; you knew Betty."Betty Jane Rice Cook was born in Portland, Oregon on May 31, 1943. This started her life long love affair with Oregon. She attended Riverdale Grade School, Lincoln High School, and graduated from the University of Oregon with a Bachelors Degree in Education and from Western Washington University with a Masters Degree in Special Education. She loved the summers spent at the Oregon beaches and fishing over the Bar in the Pacific Ocean with her dad.1965 was a fantastic year for Betty. She met her beloved husband, Ray, graduated from U of O, and spent four months traveling through Europe with girlfriends before she married on November 30. She closed the year with a trip to Hawaii for Christmas and an extended honeymoon right before her husband was shipped off for his second tour in Vietnam.The next 48 years found her creating a home in places like Hampton, VA, Carmel, CA, Whidbey Island, WA, Lake Oswego, OR, Gig Harbor, WA and Port Orchard, WA. During that time she cared for and raised two daughters and a son as well as a menagerie of animals. Most of this time, she single-handedly maintained her brood and home while her husband, a Naval Officer, was out at sea. She spent many vacations close to home in Central Oregon and on the Oregon Coast, as well as traveling around the globe to places like the Philippines, Hong Kong, Hawaii and Europe with one especially glorious summer spent drinking tea in the garden of a 600-year-old Parsonage ringed with pink hydrangeas in the Loire Valley of France in 2008.All will remember Betty for her beautiful smile that radiated such happiness and was always wrapped in pink lipstick. She will also be remembered for her compassion and interest in others. For the way she took the time to actively listen to another. Whether it was troubled news or happy times, she was always available to sit quietly, listen, and then offer a question to ponder or a bit of well thought out advice to consider. She gave this gift freely to family, friends, youth groups, Bible Study groups and members of her church.As an extension of this compassion, she also sent hundreds, if not thousands, of hand written cards a year to this same group whether it be a congratulations or a condolence, a thank you or a thinking of you. Her diminutive and distinctive left-leaning script arriving in the mail will be missed by many.She loved working with her hands whether it was weeding in her garden, tending to her roses, hand stitching quilts, or whipping up her famous potato salad. She took the time each day to read the local newspaper, cutting out articles of interest that she thoughtfully mailed to a friend or family member. Rarely a week went by without her inviting someone into her home for a dinner, a barbecue, or a luncheon. Golf games, tennis games, boating, bridge groups, bargain shopping, window shopping, church women's groups, Bible Study groups, Jazzercise, Curves, volunteer activities, girls' weekend, traveling, and being active in the lives of her grandchildren kept her life full outside the home. Once she was diagnosed with ALS and Lyme's Disease, almost three years ago, she maintained a brave and optimistic outlook about her future. She handled the unplanned course of the diseases and the decline of her sweet self with much grace and stoicism. She became her own advocate for her illness including seeking out specialists and even pursuing alternative methods of treatment. She continued to be actively involved in the lives of her friends, her family, and her grandchildren right up until the end, even making it through her favorite holiday, Christmas. She peacefully passed away on December 30th, at home, with her hubby by her side.Betty is survived by her husband, Raymond L. Cook, her three children: Carrie Cook Minns, Courtney Cook Hopp, and Timothy Cook, as well as her sister, Barbara Rice and a special niece, Michele Cook Lacy. She is also survived by her sons-in-law, David Minns and Patrick Hopp, and her daughter-in-law, Patricia Cook and the loves of her life, five grandchildren: Hanna Minns, Jack Minns, Will Minns, Rylan Hopp, Kincaid Hopp, and Carter Cook.In lieu of flowers, donations may be made in Betty's name to the ALS Association Oregon & SW Washington.A Celebration of Life service will be held on Saturday, January 25, 2014 at 3 pm at Community of Hope, 27817 SW Stafford Rd., Wilsonville, OR 97070Officiating - Pastors Dave Soresen and Doug AdamsReception to follow

"If you knew her smile; you knew Betty."Betty Jane Rice Cook was born in Portland, Oregon on May 31, 1943. This started her life long love affair with Oregon. She attended Riverdale Grade School, Lincoln High School, and graduated from the University... View Obituary & Service Information

The family of Betty Jane Cook created this Life Tributes page to make it easy to share your memories.