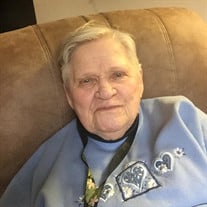 Elizabeth “Betty” Darlene Andrews Koffler October 27, 1930-March 15, 2017 Betty Koffler passed peacefully on March 15 from heart failure and she is now closer to God and exactly where she wanted to be. We will always be touched by her warm and gracious heart and devotion to the Catholic faith. We will forever enjoy memories of her laugh, her knowledge and care of tending to her flowers and gardens, and her love of playing cards and reading books and getting outside to watch a softball game. She was a profound example of someone who unconditionally loved and supported her family, and of course the Portland Trailblazers, because they are family, too. Betty and her twin brother Bob Andrews was born in Kenmare, North Dakota to Ray Andrews and Martha Jacoby Andrews. Betty grew up in the Willamette Valley and attended parochial schools in St. Paul and Woodburn and high school in Mt. Angel at the Academy. Betty and Bob had three sisters, Maxine Clifford, Marlene Thompson, and Sally Gaines. Betty married Mark Koffler on November 24, 1949 at St. Luke Catholic Church in Woodburn, Oregon. She had been a member of the Catholic Daughters of America since 1948. Over her career, Betty worked at Birdseye Cannery, Kleppinger’s Nursery, and French Prairie Nursing Home. Betty and Mark had four children, their son Larry Koffler and his wife Nancy, their daughter Donna Wright and her husband Ken, their son Rusty and his wife Dixie, and their daughter Darlene; eight grandchildren, Jeromy Koffler, Molly Eagles, Casey Robles, Kelly Koffler, Bryan Wright, Becky Sell, Kameron Koffler, and Christopher Stroup; and fourteen great-grandchildren, Thomas Nau, Anna Koffler, Nicholas Koffler, Abigail Koffler, Cole Eagles, Megan Eagles, Keyan Robles, Kaleb Robles, Kaden Robles, Addison Koffler, Emma Koffler, Brandon Wright, Jorja Sell, Jacobe Sell; and 19 nieces and nephews. In lieu of flowers, the family would like you to consider donations made in Betty’s honor to the St. Luke chapter of the Catholic Daughters of America. Funeral services will be held Monday, March 20, 2017 at 11:00 a.m. at St. Luke Catholic Church in Woodburn.

Elizabeth &#8220;Betty&#8221; Darlene Andrews Koffler October 27, 1930-March 15, 2017 Betty Koffler passed peacefully on March 15 from heart failure and she is now closer to God and exactly where she wanted to be. We will always be touched... View Obituary & Service Information

The family of Betty Darlene Koffler created this Life Tributes page to make it easy to share your memories.