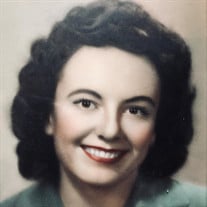 Betty Linklater Storrs April 18, 1922 – November 9, 2019 Our sweet mom passed away on November 9, 2019. She was 97 years old. Born on April 18, 1922 in Salt Lake City, Utah to Edna Wilkinson Linklater and William Linklater, she lived a long life filled with love and happiness. In the hours before her passing, she was surrounded by her immediate family, wearing her beautiful smile that never failed to melt our hearts. Betty spent the first 12 years of her life in Sibbald, a small hamlet in southern Alberta, Canada, near the border of Saskatchewan. Shortly after her 12th birthday, she and her younger sister, Jean, moved with their mother to Salt Lake City, Utah, where the climate was more forgiving, and friends and family more abundant. After graduating from West High School, Betty earned a Bachelor of Arts degree from the University of Utah. She spent a year in banking, then taught school until, in 1948, she met Dean S. Storrs, a former naval officer and structural engineer with whom she shared a common love for exploring the mountains of Utah. They were both members of the Wasatch Mountain Club and could be found year-around on the trails and slopes of the Wasatch Mountains. Betty and Dean married in 1949, started a family in 1954, and built a home in the Salt Lake City suburb of East Millcreek in 1958, where they celebrated 61 years of marriage before Dean passed in 2010. In 2012, she moved to Wilsonville, Oregon to live with her daughter and son-in-law. Betty was a voracious reader. From best-selling novels to epic biographies, from ancient history to modern classics, she consumed books faster than she could find new ones, and was a frequent visitor to several libraries in both Utah and Oregon. She was especially grateful for the Wilsonville Public Library in Wilsonville OR, where she was a regular the last seven years. Betty was preceded in death by her husband, Dean, and her sister, Edna Jean Guilford. She is survived by her children, Debra Johnson (Brent) and Scott Storrs (Eileen), grandchildren, Nicolette Kent (Cory) and Jesse Johnson (Elyse), great-grandchildren, Scarlett Burr and Wynn Johnson, Scarlett’s father, Adam Burr, and her first cousin, Edmund S. Wilkinson, Jr. (Barbara), with whom she shared a relationship as close as siblings. Betty was very grateful for the care provided by Heidi Hunziker, whose thoughtful companionship comforted her in this past year. We all appreciate her kindness and consider her part of our family. Though she’s been gone only a few days, we already miss her immensely. At her request, there will be no memorial service. Donations in her memory can be made to the Wilsonville Public Library at http://wplf.org/donate-today.

The family of Betty Linklater Storrs created this Life Tributes page to make it easy to share your memories.