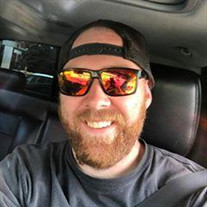 On October 8, 2018 Christopher passed away at his home near Portland, Oregon. Christopher was born on May 11, 1991 in Portland, Oregon to Jeff and Lori (Chastain) Baker. Chris started school at Welches Elementary. Then our family moved to Bend, Oregon in 1997. He went to Buckingham Elementary, Lava Ridge Elementary and SkyView Middle School. Chris graduated from Mt. View High School in Bend, Oregon in 2009. After high school he worked in the auto body/painting industry until he was accepted in the UA Local 290 Plumbers, Steamfitter and Pipefitters Union as an Apprentice. Chris loved his job at TCM in Portland and his work friends meant the world to him. He loved his career and was almost ready to complete his education and would have become a Journeyman mid 2019 . Chris was passionate about sports. His love of sports started as a child when he played TBall at 3 yrs old because his sister's team needed an extra player. Then he started playing soccer on the local competitive team COSA and was always fast and so proud when he would score a goal or win a kickoff for the team at the tournaments. His dad would have season tickets to the Oregon Ducks Football games and he loved going to those games with his dad and/or watching the Ducks football games on TV, if he couldn't go to the game. He was also a fan of Portland Timbers soccer team and the Portland Trailblazers basketball team. He kept up on all the statistics of his favorite teams. In his younger years, he was a great soccer player and loved playing basketball throughout his school years. Chris loved camping, fishing, hunting, golf, snowboarding and wakeboarding. He and his dad would golf almost everytime they were together. He got to go on two Alaska fishing trips with his dad and friends. He loved those trips and had such a great time. Chris grew up camping here in Oregon or down at Shasta Lake. Chris loved to come to Bend and surprise his mom when she least expected it. He loved just hanging out with his mom, sister and sister-in-law whether it was to relax, go shopping or a movie. He also loved going to concerts with mom or the family. Chris had a great sense of humor and man he could grow a great 'ginger' beard. Chris is survived by his Father and Mother, Jeff and Lori Baker of Bend, OR, Sister Lauren Baker and Sister-in-law, Jenny (Alexander) Baker of Vancouver, WA, his paternal Grandmother, Mary Twissleman Custer of Sacramento, CA, maternal Grandparents, Bill and Wanda Chastain of Visalia, CA. Uncle Den and Aunt Cindy Baker of Mariposa, CA, Uncle Arb of Shasta City, CA and Uncle Mark and Michael Baker of Sacramento, CA and several cousins. Chris was preceded in death by his older Brother, Jared Baker and his Uncle Lynn Chastain. Due to winter road conditions and out of town family and friends, our family plans on a Celebration of Christopher's Life in the Spring of 2019.

On October 8, 2018 Christopher passed away at his home near Portland, Oregon. Christopher was born on May 11, 1991 in Portland, Oregon to Jeff and Lori (Chastain) Baker. Chris started school at Welches Elementary. Then our family moved to... View Obituary & Service Information

The family of Christopher Logan Baker created this Life Tributes page to make it easy to share your memories.

On October 8, 2018 Christopher passed away at his home near Portland,...