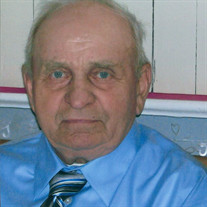 Claude Luke Pintok passed away on Friday, December 20, 2019 at age 92, surrounded by his family. He will be laid to rest in St. Lukes Cemetery in Woodburn, Oregon. Claude served in the Army during the Korean War from 1950-1952. After his basic training at Fort Lewis, Washington he was stationed in Europe where he guarded munition dumps. He was in the reserves until he was honorably discharged in 1956. After serving in the Army, he went to help his dad clear a section of land on the farm and then moved to Oregon. Claude worked as a logger for many years and was a control room operator at Oregon Portland Cement Company. In 1966, he acquired a hay and cattle farm which he eventually ran full-time. He was meticulously organized and he and Mom kept the farm in excellent condition. Dad was gifted with building and creating things. If he had the materials, he could build it. Claide me the love of his life, Genevieve Langner, who grew up in Holdingford, Minnesota. They were married on June 6, 1955 in St. Cloud, Minnesota. They moved to Clackamas, Oregon and later to Canby and then to their farm near Aurora, Oregon where they have lived since 1966. They were married for 62 treasured years. Claude lived a life that honored the Lord and was committed to his faith and his marriage. To the very end, Claude and Genevieve's love for each other was so refreshing, sweet and sincere. Claude and Genevieve raised a family of eight. He was a devoted husband and father, and had an incredible work ethic. Claude loved that outdoors and going for drives with Mom throughout the countryside. He was a man of good morals and godly character. Preceding Claude in death was his wife, Genevieve and son Craig Steven Pintok, his parents and five brothers and three sisters. Claude is survived by his son Bryan Pintok; daughters Joyce Mullen, Lori Pintok, Beverly Morris, Julie Anderson, Phyllis Egli and Kristen Moore; 22 grandchildren; 18 great grandchildren. He is also survived by his sisters Josephine and Lorraine.

Claude Luke Pintok passed away on Friday, December 20, 2019 at age 92, surrounded by his family. He will be laid to rest in St. Lukes Cemetery in Woodburn, Oregon. Claude served in the Army during the Korean War from 1950-1952. After his... View Obituary & Service Information

The family of Claude Luke Pintok created this Life Tributes page to make it easy to share your memories.