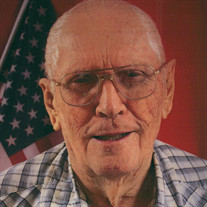 CLEMENS JOSEPH SCHNIDER February 26, 1930 - February 25, 2017 Clem passed away peacefully at the Mt. Angel Towers from multiple myeloma cancer at the age of 86. His funeral was held on March 2, 2017 at St. Mary's Catholic Church in Mt. Angel, Oregon, followed by a graveside service with military honors at the Calvary Cemetery. Clem was the youngest of three children born to Lawrence Schnider and Clara Ertelt Schnider of Mt. Angel, where he attended school and helped on the family farm located a few miles east of town. He served in the Army during the Korean War and was honorably discharged. A lifelong farmer, Clem lived and worked on farms in Mt. Angel, Hubbard, Spray, and Scio, Oregon. After retirement, he moved to Woodburn. Relationships were important to Clem, and he went out of his way to maintain connections with family and friends by dropping in for visits and always welcoming visitors to his home. Clem enjoyed reading histories of Oregon and the Willamette Valley, and researching the Schnider family genealogy. He also enjoyed taking road trips or simply going for a drive through the country. From his first marriage to Darlene Hassing, Clem has two daughters - Kathleen Schnider and Susan Schnider Brost; and two grandchildren - Jason Brost and Laura Brost Gillum. From his second marriage to Callie Ann Jacobsen, Clem had three stepchildren - Jon Watts, Donald Watts, and Terra Adams. Clem was unmarried when he passed. Clem will be dearly missed by his loving daughters, grandchildren, and stepchildren; his nieces and nephews; his sister, Dorothy Mahoney; and the many friends he made throughout the years. Clem was preceded in death by his parents and brother, Albert Schnider. Donations may be sent to Willamette Valley Hospice, 1015 3rd St. NW, Salem, OR 97304.

CLEMENS JOSEPH SCHNIDER February 26, 1930 - February 25, 2017 Clem passed away peacefully at the Mt. Angel Towers from multiple myeloma cancer at the age of 86. His funeral was held on March 2, 2017 at St. Mary's Catholic Church in Mt. Angel,... View Obituary & Service Information

The family of Clemens Joseph Schnider created this Life Tributes page to make it easy to share your memories.