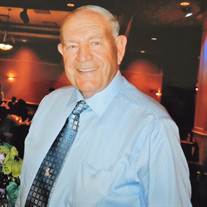 Clement Joseph Ruef, age 89, of Mt. Angel, Oregon, was welcomed into the arms of his Savior on March 22, 2017, surrounded by family and his beloved wife of 68 years, Maria. Clem was born April 26, 1927, in Stayton, Oregon to Placidus and Anna (Silbernagel) Ruef. As the oldest of six children, Clem was born to lead, but always remained a farm boy at heart. He told many stories of growing up in a log cabin on Old Mehama Road, east of Sublimity. His family later moved to Mt. Angel, where Clem attended high school at Mt. Angel Abbey. In November 1943, at the age of 16, Clem enlisted in the Merchant Marines where he served aboard an oil tanker, delivering fuel to aircraft carriers in the Pacific during World War II. His crew members affectionately called him “the Kid.” Among his favorite memories was returning to port on Christmas Eve of 1944, passing under the Golden Gate Bridge while listening to “Rum and Coca-Cola” by the Andrew Sisters. In 1945, Clem left the Merchant Marines to join the Army Air Corps. He was a quick study in aircraft maintenance and swiftly moved up the ranks. He was assigned to Keesler AFB in Biloxi, Mississippi, where he met a Biloxi girl named Maria Barrilleaux. Each being the eldest child in large Catholic families, they found much in common and quickly fell in love. They were married in Biloxi on Easter Sunday, April 17, 1949, just weeks before Clem was sent to war-ravaged Berlin, Germany to participate in the Berlin Airlift. Clem was trained in the maintenance of 15 different aircraft and spent over 11,000 hours in the air as a flight engineer. As a crew chief, he insisted on being part of any flight crew that was testing his work. A plane would not pass inspection if he wouldn’t fly in it himself. Clem later was chosen to join an elite air commandos unit at Eglin AFB in Florida. He spent 4 years flying tense, cold war era missions. He was stationed all over the US and twice in Germany before retiring in May, 1970, having attained the highest possible rank for an NCO, Chief Master Sargeant. In retirement, Clem returned to his beloved, Mt. Angel, where he started a farming operation with his brother, Max. Clem soon had his six children following “orders from headquarters.” Clem was the patriarch of three generations - father of six, grandfather of 19 and great grandfather of 13. He loved each and every one. Clem is survived by his wife, Maria, six children, Mary (Steve) Lierman, Jim (Gina) Ruef, Mike (Susie) Ruef, Clem (Lan) Ruef, Bob (Carol) Ruef, Don (Gail) Ruef, brother Max Ruef and sister Henrietta Dill. He was preceded in death by his parents, Placidus and Anna Ruef, his sisters Marie Ruef and Gloria Andres-Bye, and his brother Pete Ruef. Clem was a man of deep faith and integrity who led by example. No matter where he served, he was deeply involved in the local parish and community. His grandchildren cherished his colorful stories of air missions and overseas assignments. He loved spending time with family and friends, elk hunting with his boys and most of all crabbing in Newport with a rotating crew of family and friends. He remained in contact with Air Force buddies to the end, attending reunions throughout the US, even hosting one in Mt Angel. Clem truly filled a room with his cheerful, commanding presence. He was genuine and lovable - larger than life- the John Wayne of the family. Funeral Services will be held at St. Mary’s Catholic Church in Mt. Angel on March 27, 2017. Rosary at 10:30 AM and Funeral Mass at 11:00 AM. In place of flowers, donations, may be made to Boys Town Charity or St. Joseph Shelter in Mt. Angel.

Clement Joseph Ruef, age 89, of Mt. Angel, Oregon, was welcomed into the arms of his Savior on March 22, 2017, surrounded by family and his beloved wife of 68 years, Maria. Clem was born April 26, 1927, in Stayton, Oregon to Placidus and Anna... View Obituary & Service Information

The family of Clement Joseph Ruef created this Life Tributes page to make it easy to share your memories.