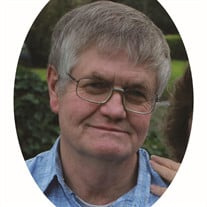 Clinton Donald “Don” Fackrell, 66, passed away peacefully at home on April 12, 2018 after a short battle with neuro-endocrine cancer. He was born on May 27, 1951 in Nampa, Idaho the first of seven children to Wilbert Clinton Fackrell and Vera Leona (Crawford). He moved shortly thereafter, with his family, to Oregon, the state he called “home”. Don served a mission in the Indiana / Michigan Mission. He joined the Air Force in 1977 and was assigned to Malmstrom AFB, Great Falls, Montana where he met Alfreda Wright; they were married in the Cardston, Alberta Temple of The Church of Jesus Christ of Latter-day Saints on May 19, 1979. During his Air Force career, Don and the family resided in Turkey, Japan, Colorado, Louisiana, and Oklahoma. They always considered it a blessing to be able to travel and learn about other cultures and customs. After retiring in 1995, Don moved his family back to Oregon where he worked for the United States Postal Service in Corvallis and then Woodburn. He was a friendly and familiar face to many at the Woodburn Post Office until his second retirement in June of 2017. Don was actively involved in the Cub Scout program even after he became ill. He greatly enjoyed working with that program and supporting others in their Cub Scout positions. He was an avid Indexer doing his part to insure that historical records were archived making them available for genealogical research. He would encourage and guide others to become involved in the indexing program. Don is survived by his wife Alfreda and their seven children : Kristen (Chase) Montague of Rigby, Idaho, Jonathan (Ashlie) also of Rigby, Diane Fackrell of Woodburn, Oregon, Lori (Richard)Allen also of Woodburn, Jeremy (Kayla) of Lawton, Oklahoma, Kelsey Fackrell of Woodburn and Tanner, who is currently serving in the England, Manchester Mission. Don is also survived by 10 grandchildren: Ramzi and Max (Kristen), Jaylie, Brielle and Grant (Jonathan), Emma, Anna and Ellie (Lori), Levi and Rylie (Jeremy). His father preceded him in death in 1978. He is survived by his mother, Vera and 6 siblings; Alan (Irene), Leanna (Jeff) Oleson, Ted (Connie), Regina Everett , Melinda (David) Crager, and Brian (Charlene) Don left a legacy of love for his family, kindness and dedication to a lifetime of service.

Clinton Donald &#8220;Don&#8221; Fackrell, 66, passed away peacefully at home on April 12, 2018 after a short battle with neuro-endocrine cancer. He was born on May 27, 1951 in Nampa, Idaho the first of seven children to Wilbert Clinton Fackrell... View Obituary & Service Information

The family of Clinton "Don" Donald Fackrell created this Life Tributes page to make it easy to share your memories.