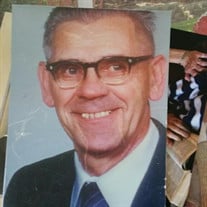 Dale Elburn Johnson Obituary (September 24, 1920 – June 15, 2016) Dale E. Johnson, a lifelong Woodburn resident, died Wednesday, June 15, at the age of 95. Dale was born in Woodburn on September 24, 1920, the second of four children born to Henry and Ida Johnson. During high school, Dale was a member of the Woodburn High School Chess Club, becoming a champion player, and after graduating in 1938 he joined the Civilian Conservation Corps, which was a program created in 1933 by President Franklin D. Roosevelt. Dale was sent to work in the Willamette National Forest near Government Camp. In December of 1942, during World War II, he joined the United States Navy and served in the Construction Battalion (the “Seabees”) at Adak, in the Aleutian Islands. He was discharged three years later in November of 1945. After returning home from serving in World War II, Dale went to work for Birds Eye Frozen Foods here in Woodburn. Dale spent the next forty-plus years working there, eventually becoming one of the plant foreman. He retired from Birds Eye 1982. After retirement from Birds Eye he went to work as the Manager at Panor 360, a 55+ condominium community here in Woodburn. Dale is survived by his wife of 29 years, Helen; five children: Al Johnson, Judy Pruitt, Marlene Elser, Gary Johnson, and Lary Johnson; one step-daughter: Elaine Neff; eight grandchildren; three step-grandchildren; and eight great grandchildren. In addition to mastering chess, Dale was an avid sports enthusiast all his life. He particularly liked the Minnesota Vikings. He also faithfully followed the Woodburn Bulldogs, especially during the years his sons played high school sports. A Memorial Service was held at the Hoodview Church of God, Saturday, June 18, 2016. Interment will be in the Belle Passi Cemetery.

The family of Dale Elburn Johnson created this Life Tributes page to make it easy to share your memories.