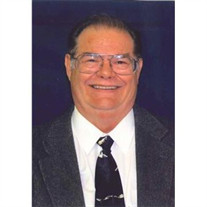 Well dad, you never failed to be the first to arrive at any party or gathering. Though it pains us to say so, it makes perfect sense that even to Heaven, God found it His perfect timing for you to arrive when the rest of us felt it a little too early. David Alger Fitch passed into glory on Wednesday, February 17, 2016, at the young age of 67. Born January 31, 1949, to Alger and Betty Fitch, David was a passionate and incredible individual who shared his love for the Lord, for his family, and for music everywhere he went. He had a huge smile, and loved to make everyone laugh, even to his last days. Nope, we’re not kidding…he was cracking jokes just hours before the Lord took him home. And we are certain nothing made God happier than welcoming His beloved saint, and son, home. David married Darcy L. Sink in 1974 and raised four daughters (and in consequence several male dogs – truly his dear friends and number one source of sanity on several occasions). Though his time here with us was not as long as we had all hoped, it was very well spent. If you knew him for just a little while, you could not miss his incredible talent and passion for music, and in fact, we are confident there is not one instrument he couldn’t play if he could hold it in his hands. If you knew him, you’d be laughing. Like his father before him, he never failed to turn a phrase, and a frown. But most especially, if you knew him for any length of sincere time, you would discover and develop a deep love for the Lord Jesus Christ, and the church. This was his number one passion and he devoted his life’s work to this. He spent 46 years as a minister, the last ten years of his ministry at Woodburn Christian Church. He touched the lives of countless people, sharing the good news of his best friend, Jesus. David is survived by his beloved wife, Darcy, two sisters, Luana and Marcia, daughters and sons-in law, Bethany and Gabriel Canada, Rachael McLeod, Miriam and Joseph Watkins, and Rebecca Fitch, as well as eight grandchildren, and countless friends. Instead of flowers, or gifts, we truly believe it would bless his legacy most if instead you would make someone smile today. Make some music, tell a joke, hold a hand, say a prayer… and if you feel so inclined, you can give to the Oregon Christian Convention Center in Turner, Oregon - a legacy of faith and family that has truly blessed believers throughout Oregon for many generations, and continues to bless the next generations of the Fitch family. A service will be held at Woodburn Christian Church on Saturday, February 27, at 1:00 pm. ARGT. By Simon-Cornwell Colonial Chapel.

Well dad, you never failed to be the first to arrive at any party or gathering. Though it pains us to say so, it makes perfect sense that even to Heaven, God found it His perfect timing for you to arrive when the rest of us felt it a little... View Obituary & Service Information

The family of David Alger Fitch created this Life Tributes page to make it easy to share your memories.

Well dad, you never failed to be the first to arrive at any party...