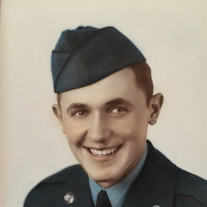 On the evening of July 19th 2016, surrounded by his loving family, Ray Johnson "slipped in surly bonds of earth" and became one with the ages. He was just shy of his 85th birthday. Born and raised in Mondamin, Iowa he was the only child of Orville "Brick" Johnson and Madgel Johnson. During the Korean conflict, Ray proudly served as an aircraft mechanic in the United States Air Force, stationed in Okinawa. After completing his tour of duty, Ray settled in Stockton, California where he met and married Jeannette Mac Knight (RN). Stockton became their home for over 15 years, where Ray continued his work as a aircraft mechanic at Sharpe Army Depot. His service of our country continued through most of the Vietnam Was. During this time Ray also became the first certified sound technician in California, working with large commercial installations. In 1970 the Johnson family moved to Bozeman, Montana. For more than 20 years he worked there as the owner of Commercial Sound, installing commercial sound systems. In 1990 Ray and Jeannette moved to Wilsonville, Oregon to be closer to family. Ray became an integral part of his grandchildren's lives, never missing a game or a school event. Having joined the Barn Stormers remote control airplane club in Butterfield, Oregon, Ray enjoyed countless hours designing and constructing his remote controlled airplanes. A patriot at heart, he was also a member of the 19th Bombardment Group, Veterans of Foreign Wars, and the American Legion. The Johnson family attended Lake Grove Presbyterian Church in Lake Oswego, Oregon. David Ray Johnson is survived by his wife of 61 years, Jeannette, his daughter Ruth Hardie, and his grandchildren, Joseph Ray Hardie and Laura Michelle Hardie. I lieu of flowers, any memorial contribution could be sent to the Shriners Hospital for Children or a Veterans Organization of your choosing. The Johnson family like to thank the Veterans Administration for the devoted attention given a beloved husband, father, grandfather and friend. A service with military honors will be held at Willamette National Cemetery on August 10, 2016 at 1:30 p.m. A celebration of Ray's life will take place at Charbonneau Country Club at 3:00 p.m.

On the evening of July 19th 2016, surrounded by his loving family, Ray Johnson "slipped in surly bonds of earth" and became one with the ages. He was just shy of his 85th birthday. Born and raised in Mondamin, Iowa he was the only child of Orville... View Obituary & Service Information

The family of David Ray Johnson created this Life Tributes page to make it easy to share your memories.