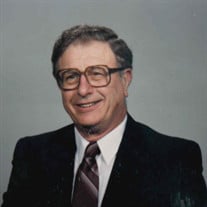 Rev. David W. Weinert David W. Weinert passed away at home early Sunday morning, April 14, 2019 in Woodburn, Oregon at age 92. He was born in a home on the Kansas state line near Preston, Nebraska on August 4, 1926. He grew up in rural Nebraska on the family farm, the sixth and youngest child of Henry and Martha Bletscher Weinert. He loved and often spoke of the years of his childhood and youth on the farm, enriched by a loving family and sustained by faithful participation in local church life. After graduating from Falls City High School, he attended two years at Asbury College in Kentucky, later completing a Bachelor’s degree at Southwest State College in Weatherford, Oklahoma and the degree of Bachelor of Divinity at Western Evangelical Seminary in Portland, Oregon. Rev. Weinert served as pastor in churches of the Evangelical United Brethren Church in Kansas and Oklahoma, Calvary Temple in Parkersburg, West Virginia, and the Evangelical Church in Oregon for 45 years. In Oregon he served the Eugene Willakenzie Church, Salem First Church, and Harmony Church in Milwaukie. His churches were characterized by a strong emphasis on Christian missions and service, with many missionaries and ministers called to service under his ministry, and by a preaching and teaching emphasis on the message of Christian holiness. He served for 30 years while a pastor and in retirement as President of the Multnomah Holiness Association. Rev. Weinert met Beth Means while pastoring his first church in Derby, Kansas, where they were married in 1951. He passed away just a week from their 68th anniversary. In their nearly 68 years of marriage, they worked together in equal partnership in raising a family of their six children, serving pastoral assignments in 10 different churches, and caring for the home life of their growing extended family. Everything they did they did together. Rev. Weinert is survived by his wife, Beth Weinert of Woodburn, Oregon; sister Helen Scott of Newton, Kansas; children Mark and wife Betty Weinert of Milwaukie, Oregon, Janet Kunze of Shelbyville, Kentucky, Brad and wife Kristy Weinert of Cordoba, Argentina, Debbie and husband Tom Weatherspoon of Beavercreek, Oregon, Kim and husband Karl Kochendorfer of Portland, Oregon, and Robert and wife Nancy Weinert of McCordsville, Indiana; daughter-in-law Karen Weinert of Portland, Oregon; 19 grandchildren, 23 great-grandchildren, and his first great-great grandchild on the way. A memorial service will be held on April 27 at 11:00 a.m. at the Multnomah Holiness Campground at 10801 SE Holgate in Portland. The family invites memorial gifts to be given to the Multnomah Holiness Association of Portland, Oregon.

Rev. David W. Weinert David W. Weinert passed away at home early Sunday morning, April 14, 2019 in Woodburn, Oregon at age 92. He was born in a home on the Kansas state line near Preston, Nebraska on August 4, 1926. He grew up in rural Nebraska... View Obituary & Service Information

The family of Reverend David William Weinert created this Life Tributes page to make it easy to share your memories.