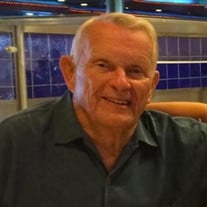 Donald “Papa” Boals passed away on Wednesday, September 16, 2020 at Enliven Memory Care in Wilsonville, OR. He was surrounded by his wife and the amazing caretakers who affectionately named him “Papa Bear” and the “Big Lug.” We are eternally grateful for their loving care and kindness not only to Don, but his whole entire family. Don was born on October 26, 1932 in El Centro, CA, then moved to Pasadena where he found a passion for sports which included swimming and basketball. Eventually he attended Pasadena City College, enlisted and served in the Korean War, graduated from UCLA, and went to Pharmacy school at University of Southern California, which began his lifelong love of the USC Trojans. When he finished Pharmacy school, he began working at the family business - Wilkinson’s Drug Store in Fullerton, CA, and worked part time at Cal State University Fullerton where he continued for 24 years. He married his first wife (Jenny Lind Wilkinson) and raised their four children in Fullerton, CA. This was where his love of animals and the outdoors began! You could always find him out in the yard playing with one of the kids or working in the garden or barn. He was a true “family man,” devoting his time to raising four children - teaching the lessons of hard work, honesty, integrity, and having fun together. That marriage ended amicably after 32 years. Don had many interests and hobbies which included playing handball where he continued playing with the same group of men for almost 40 years. He was an avid tennis player, snow skier, and loved hiking - and on one such hike he met a woman who would eventually be his loving wife for the next 28 years! Don & Janice married in February, 1992, where they blended two families together with love. They lived in Corona Del Mar and bought a Road Trek van where they began camping around the United States - mostly visiting kids and grandkids to celebrate important milestones in their lives. We fondly remember Papa and Grandma Janice parking the Road Trek down at Big Corona for hot dogs after a fun day at the beach. Don found many lifelong friends through hiking groups, which led to many incredible trips to national parks and the Grand Canyon. They enjoyed traveling around the world and always returned with many stories of their adventures. When we remember “Papa” we will always remember the man who taught us the value of family, a hug, and the importance of the words “I Love You.” Don is survived by his wife Janice Boals; his children: Melissa Zotovich (Roger), Jeff Boals (Beau), Lucinda Francis (Jim), Greg Boals; his stepchildren: Mike Barr (Debi), Julie Gess (deceased), Laurie Barr (Mark Kochanowski), 15 Grandchildren and two Great Grandchildren. A Celebration of Life will be held in Southern California next year at a date yet to be determined. His ashes will be laid to rest in the Pacific Ocean, a place that he loved so much. In lieu of flowers, donations can be made to the Alzheimer Association of Orange County https://www.alzoc.org/get-involved/donate/

The family of Donald Boals created this Life Tributes page to make it easy to share your memories.