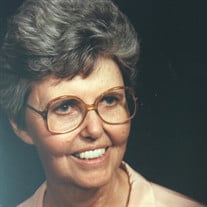 Donna Balsiger-Hamilton, 88 passed away peacefully at 11 P.M. Tuesday January 3rd, 2017 in Tualatin, Oregon. She was born on September 5th, 1928 to Francis and Eunice Smith in Cottage Grove, Oregon. Donna moved a lot due to her father's employment and also lived in Bellingham, Washington, Sutherlin, Oregon, and back to Cottage Grove where she graduated from high school. After high school Donna attended both Oregon State University and University of Oregon where she met her first husband Phillip R. Balsiger, a World War II Bomber Pilot who Donna married on June 16, 1947. They had two children, Leslie John Balsiger and Debi Balsiger-Laue. They settled in Wilsonville, Oregon in 1956 where Phil had his architectural practice and where Donna lived most of her life. Donna belonged to the Seventh Day Adventist Church most of her adult life and she was active in the Historic Message Church in Portland. She also liked to shop, travel and was always outgoing and gregarious with a big smile on her face. She was later married to Al Hamilton who preceded her in death. Donna had many friends who will miss her-among the closest-Sue, Ronica, and Skye Ludlow, who provided care for her during the last three years of her life. She is survived by her two children, Debi Balsiger-Laue of Wilsonville, Oregon, Les Balsiger of Cheyenne, Wyoming and four grandchildren, Molly Laue-Gabus of Seattle, Washington, Kevin Laue of Wilsonville, Oregon, Danielle Balsiger-Nilsen of Sandefjord, Norway and Jonatan Balsiger of Wheatland, Wyoming. A celebration of life will be held on March 11, 2017. For more information please email Debi at [email protected] or call 503-502-1750.

Donna Balsiger-Hamilton, 88 passed away peacefully at 11 P.M. Tuesday January 3rd, 2017 in Tualatin, Oregon. She was born on September 5th, 1928 to Francis and Eunice Smith in Cottage Grove, Oregon. Donna moved a lot due to her father's employment... View Obituary & Service Information

The family of Donna Mae Hamilton created this Life Tributes page to make it easy to share your memories.