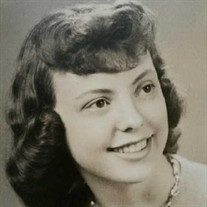 Donna Jensen, 79, a resident of Wilsonville, passed away while surrounded by family on Monday, Sept. 4. Donna was a world traveler, a philanthropist, a business owner and entrepreneur, and, above all else, a loving and devoted mother. Donna was born on May 7, 1938 in Vancouver, Wash. to William and Janet Wineberg, the youngest of three daughters. She graduated from Evergreen High School in Vancouver in 1956. She attended Clark College and later the University of Arizona, where she was a member of the Alpha Delta Pi sorority. She operated Portland Meadows Race Track and Golf Course for a number of years, during which she played a key part in the horse racing industry. Donna was an avid contributor to Oregon 4-H and was recognized by Yamhill and Clackamas counties for her contributions. Other charities she supported include the Salvation Army, Camp Fire, Girl Scouts, and St. Jude Children's Research Hospital. She will be remembered by many friends and her family for her outgoing personality and generous nature. Donna is survived by her two sons, Eric Jensen and John Jensen Jr.; her grandchildren John III and Jesse; her sister, Ellen Leigh; and several nieces and nephews. She was preceded in death by her husband, John Jensen; her son, Steven Jensen; her sister, Sella Hatfield; and her parents. A service is scheduled for 1 p.m. Saturday, Sept. 16, at Cornwell Funeral Chapel, 29222 S.E. Town Center Loop E, Wilsonville, with a reception to follow at Holiday Inn, 25425 SW 95th Ave., Wilsonville. All are welcome to attend and celebrate Donna's life and memory. In lieu of flowers, the family would like any donations to be given to either the Oregon 4-H Foundation or the American Diabetes Association.

Donna Jensen, 79, a resident of Wilsonville, passed away while surrounded by family on Monday, Sept. 4. Donna was a world traveler, a philanthropist, a business owner and entrepreneur, and, above all else, a loving and devoted mother. Donna... View Obituary & Service Information

The family of Donna Mae Jensen created this Life Tributes page to make it easy to share your memories.

Donna Jensen, 79, a resident of Wilsonville, passed away while...