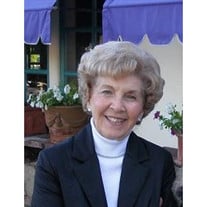 Dorothy Evelyn Himmelberg (nee Antrim) died peacefully on February 15 in Sherwood, Oregon at the age of 90. Dorothy is survived by her children, Claudia Himmelberg Worl McCarter and Jerome Himmelberg, Jr. along with their respective spouses Brian McCarter and Barbara Taylor Himmelberg; her siblings Thelma Hamilton, Lillian Cook, George Antrim, and Carl Antrim; her grand children by her daughter Claudia - Sara Worl and Sean Worl; and her great grandchild Evelyn Worl who was named in Dorothy’s honor. She is preceded in death by her husband, Jerome (Jerry) Himmelberg in 2006. In 2010 Dorothy reunited with her high school boyfriend, Farrell Roberts who was also previously widowed and they happily spent Dorothy's final years together. Dorothy was born Dec 11, 1925 in Kansas City, Missouri to George & Beatrice Antrim and joined the Baptist church where she loved to sing. She graduated from Northeast High School in 1941. She and her husband Jerry announced their engagement in June of 1944 at a Himmelberg family gathering in Glasgow, Missouri when Jerry was home on leave from the U.S. Marines. After Jerry returned home from the Pacific, completed college, and Dorothy joined the Catholic church they were married on February 8, 1947. Dorothy attended Kansas City Business College and then worked as an executive secretary at TWA. She was proud that she helped launch her husband’s career by getting him an interview at TWA. Dorothy became a full time homemaker upon the birth of her eldest child, Claudia in 1952. In 1954 the family moved to Great Neck (Long Island), NY and shortly thereafter settled in Norwalk, Connecticut where her youngest child Jerry Jr. was born in 1958. A subsequent move took them to Wilton, Connecticut in 1964. The family moved to Palos Verdes in Southern California in late 1966 where Jerry continued his career in airline finance. Dorothy and Jerry then moved to Wilsonville, Oregon in 1987 to be near their children and grandchildren who by then were all living in the Portland, Oregon area. Dorothy was a dedicated mother who taught her children to read before entering kindergarten, was an accomplished seamstress who made all of her daughter’s clothes for most of her childhood, and as a child of the Great Depression, passed on her values of hard work and economy. Her friends, faith and family were the core of her life. She and Jerry were active members of the Catholic Church. Dorothy volunteered many hours at various tasks from sewing costumes for the children's plays to helping out in the office. Many close friendships and an active social life evolved from their involvement with the church. It helped them quickly make friends after each move the family made. Dorothy was consummate bridge player. She enjoyed close friendships with members of her varied bridge groups and she was always keen to teach a new member. She and Jerry entertained often with their bridge groups. Dorothy and Jerry took the family on many enjoyable trips throughout the states and later to Europe . As a young mother she was sure to pack the car with games and treats to make the longer car trips fun filled. Picnics and stops for the kids at motels with swimming pools were always included in the itinerary! Later years found the family traveling to Europe and taking cruises to the Mediterranean, Baltic and Norway. They also loved to visit the Hawaiian islands, including family and friends on several trips. Dorothy's favorite sport was golf and they were fortunate to live on the Charbonneau golf course in Wilsonville for 26 years. They loved to travel with their golfing group to great golf courses in the Pacific Northwest . Dorothy and Jerry kept in touch with the friends they made coast to coast and visited as many as they could throughout the years. A service will be held at 11 a.m. Saturday, Feb 27 at St Cyril's Church, 9205 SW 5th St. in Wilsonville, Oregon. A reception will follow in the Church Hall.

Dorothy Evelyn Himmelberg (nee Antrim) died peacefully on February 15 in Sherwood, Oregon at the age of 90. Dorothy is survived by her children, Claudia Himmelberg Worl McCarter and Jerome Himmelberg, Jr. along with their respective spouses... View Obituary & Service Information

The family of Dorothy Evelyn Himmelberg created this Life Tributes page to make it easy to share your memories.