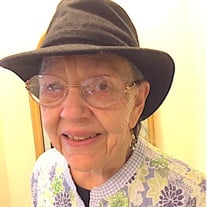 Dorothy was the daughter of Thomas Sterling and Mary Venetta Zimmerman and was born in North Bend, Oregon. She lived her early years in the small logging town of Powers Oregon and in about 1933 her family moved to Eugene, Oregon. She attended Mills College in Oakland California where she met a handsome Naval instructor from the Naval Electronics and Radio Communications training school on Treasure Island, at a school dance. She married that Naval instructor, Robert Poznanski, and spent the next 70 years by his side. In the early years they lived in Chicago and enjoyed life in the Big City. After their three daughters were born, they decided to find a better environment in which to raise their girls. So in 1952 Bob came to Portland, Oregon, found a job and called Dorothy to ask her to sell their home in Chicago and make arrangements to move everything to Oregon. So, with a 2,3 and 5 year old, Dorothy sold the home, arranged for their possessions to be moved to Portland and took a train to Portland, with three toddlers in a snow storm! Later that same year they started a business together, Phillips Electronics, and worked it together for 45 years. They made lifelong friends through the business both with customers and employees. Their daughter, Roberta, managed the business after their retirement and today their Grandson, Casey, manages Philips Electronics. After retirement, Dorothy volunteered at Meridian Park Hospital and worked out of the Chaplain’s office for over 15 years. She loved helping other people and through the Poznanski Foundation she has helped numerous philanthropic organizations. Another of Dorothy’s passion in life was P.E.O., which is a world wide organization of women helping women reach for the stars. Over the last 150 years P.E.O. has provided over $345 million in educational grants, scholarships, awards and low interest loans to more than 109,000 women. She was proud to be one of the nearly half a million members in the USA and Canada. Her mother was a P.E.O., her three daughters and two of her grand daughters are P.E.O.s. Dorothy’s husband, Bob, died in 2016. She will be missed every day by her three Daughters, Suanne Ramar, Linda Merrihew and Roberta Keller. She also is survived by 7 grandchildren and 8 great grandchildren. There will be a no host viewing available Friday July 9th from 11am-12pm at Cornwell Wilsonville Funeral Chapel, 29222 SW Town Center Loop East, Wilsonville, Or and at 1pm there will be a short graveside service at Skyline Memorial Gardens, 4101 NW Skyline Blvd, Portland, Oregon. No reception.

Dorothy was the daughter of Thomas Sterling and Mary Venetta Zimmerman and was born in North Bend, Oregon. She lived her early years in the small logging town of Powers Oregon and in about 1933 her family moved to Eugene, Oregon. She attended... View Obituary & Service Information

The family of Dorothy Virginia Poznanski created this Life Tributes page to make it easy to share your memories.

Dorothy was the daughter of Thomas Sterling and Mary Venetta...