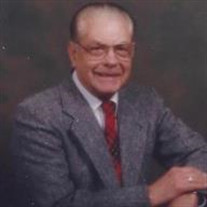 Edwin F. Pardey passed away on June 7th, 2016 at Hope Village in Canby. He was 93 years old. Edwin was born in Hubbard, Oregon, on December 24, 1922, the son of Henry and Olga Pardey. He also has a younger sister, Lucille. Edwin was raised in the North Marion area and graduated from Woodburn High School in 1940, where he lettered in football and baseball. In 1940 and 1941 he attended Oregon State University. In 1946, Edwin married the love of his life, Patricia Pardey. They have two children, James and Susanne. Patricia proceeded Edwin in death in November 2014. Edwin and Pat were married for 68 years. In 1941, Edwin started and operated a Grade A Dairy for 11 years. Then Edwin worked for 19 years with Willamette Egg Farms, becoming a partner in the company in later years. Since 1970, Edwin has been involved in the Hazelnut Industry for 42 years operating Pardey Filbert Orchards Incorporated with his son, James. Edwin was honored by the Northwest Horticultural Congress for outstanding service in 1976 and was selected as Grower of the Year in 1983. After serving as the President of the Nut Growers for two years, he has served in the leadership of the industry for many years. He has also served as a Board Member of the Hazelnut Bargaining Association for over 40 years. Edwin and Pat were very active in their church at Canby Christian Church. Edwin served as a deacon for many years. They loved to travel and visited all 50 states. There were yearly trips to Texas to see family, as well as major trips to Alaska, Hawaii, New England, Washington, D.C., Florida and the Caribbean. Edwin was a very kind, caring man who had many friends and loved ones. He was a friend to everyone he met. His name, Edwin, means “friendly” and he definitely lived up to his name. Edwin was a man with tremendous integrity, and was a great role model for his family and friends. His word meant everything. His Christian faith was lived out each and every day of his life. He will be greatly missed by all that have known and loved him. He is survived by his children, James and Susanne, as well as his sister, Lucille. There are six grandchildren, Stephen, Angela, and Jeanette who live in the Canby area, as well as Amy, Jon, and Catherine, who live in the Dallas, TX area. There are six great-grandchildren, as well as nieces, nephews, cousins, and other family members. Memorial gifts can be made to Canby Christian Church, Probe Ministries in Plano, TX; or Christ the King Church in Canby. We wish to thank the many caregivers at Hope Village and Bristol Hospice for all of their kindnesses and loving care for Edwin and Pat these past two years, since 2014.

Edwin F. Pardey passed away on June 7th, 2016 at Hope Village in Canby. He was 93 years old. Edwin was born in Hubbard, Oregon, on December 24, 1922, the son of Henry and Olga Pardey. He also has a younger sister, Lucille. Edwin was raised... View Obituary & Service Information

The family of Edwin Ferdinand Pardey created this Life Tributes page to make it easy to share your memories.