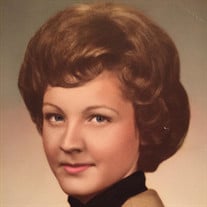 Eleanor May French (May 25, 1946 – February 7, 2020) Eleanor died in her loving husband’s arms at their home early Friday morning, February 7, 2020. She is survived by her husband of 50 years, Craig, and her younger sisters, Lucy Gonyea and Phyllis Collman of Henderson, NV. Eleanor was born in Easton, PA, but after some travel, she grew up in Aurora, CO, graduating from Aurora Central High School in 1964 having earned a National Merit Scholarship. She then graduated with her Bachelor’s degree from Colorado College in 1968. In February, 1967, she went on her first date with Craig who was attending the USAF Academy in Colorado Springs. They were seldom separated for the next 53 years getting married on June 5, 1969 at the Academy Chapel. They traveled all over the United States with assignments in Oklahoma, New Mexico, Florida, Arizona, Ohio, California, Maryland, and Washington DC. They retired from the Air Force in September 1989, and moved to Oregon which was their home for 31 years. While they had fulfilling life in the Air Force, Eleanor will be forever known as the most loving mother to her 16 Doberman kids. Eleanor was the driving force to get their first Doberman puppy in September, 1974, thereafter having one to four 4-legged kids to love and cherish for over 46 years. She and Craig were extremely active in several competitive dog performance activities, but totally absorbed with dog agility since 1995. She loved it and was so very proud of their accomplishments, but especially how much they loved doing it too – their sparkle and joy and love truly made her life worthwhile. Eleanor went to the “Rainbow Bridge” on February 7, 2020 which is explained below: Just this side of heaven is a place called Rainbow Bridge. When an animal dies that has been especially close to someone here, that pet goes to Rainbow Bridge. There are meadows and hills for all of our special friends so they can run and play together. There is plenty of food, water and sunshine, and our friends are warm and comfortable. All the animals who had been ill and old are restored to health and vigor. Those who were hurt or maimed are made whole and strong again, just as we remember them in our dreams of days and times gone by. The animals are happy and content, except for one small thing; they each miss someone very special to them, who had to be left behind. They all run and play together, but the day comes when one suddenly stops and looks into the distance. His bright eyes are intent. His eager body quivers. Suddenly he begins to run from the group, flying over the green grass, his legs carrying him faster and faster. You have been spotted, and when you and your special friend finally meet, you cling together in joyous reunion, never to be parted again. The happy kisses rain upon your face; your hands again caress the beloved head, and you look once more into the trusting eyes of your pet, so long gone from your life but never absent from your heart. Then you cross Rainbow Bridge together… Honey – I loved you so very much! Thank you for making my life worthwhile – I am so lost without you! I look forward to being together again – All of us forever together at the “Rainbow Bridge”

The family of Eleanor May French created this Life Tributes page to make it easy to share your memories.