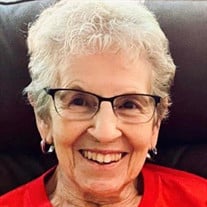 Longtime Junction City resident Eleanor Nordling died peacefully at a Salem hospital Feb. 12, hours after a major stroke. Her husband, Paul Nordling, their four daughters, a son-in-law and two grandchildren were at her side. Eleanor was born April 4, 1931 at her grandparents’ farmhouse in Woodbine, Iowa to Melvin and Helen Vroman. The Dustbowl drove the Vromans to Oregon in search of work when Eleanor was 5 and her only sibling, Ken, was 3. Her dad was a laborer. His jobs took them to Brownsville, Cottage Grove, Shedd, Dexter and Marcola before they settled in Springfield when Eleanor was in high school. She met Paul in typing class there. They married in 1950. They settled in Junction City, where they ran a Ben Franklin variety store for more than 35 years. Eleanor was a homemaker as they raised daughters Karen McCowan, Kristy Leighty, Kelly Peden and Kay Passmore. She was a perennial school room mother and an excellent seamstress who sewed many school clothes and prom dresses. She loved living in Junction City, forming lifelong friendships in her close-knit Prairie Road neighborhood. She was active in church, first at Faith Lutheran and later at First Christian. She praised God in song by playing the piano and singing alto in the choir. She and Paul supported the youth group long after their children were grown. Eleanor also created and led an outing fellowship for seniors aptly named the Fun-Timers. Eleanor was Dutch and German, but embraced Paul’s Swedish and Danish heritage by continuing to prepare “dup,” a labor-intensive traditional Swedish Christmas Eve meal of sausage, broth and rye bread. She sewed Scandinavian Festival costumes for the whole family, worked in Festival booths and sang in the Scandinavian Festival chorus. She was a founding member and past president of the Soroptimist Club. She was a member of the Garden Club and volunteered to help her needy neighbors at Local Aid. She played golf at Shadow Hills Country Club and for years rose at 5 a.m. to attend early morning water aerobics at Emerald Park Pool. She had a legendary green thumb and loved not only flowers but also pulling weeds (citing the immediate results.) She had a lifelong fascination with butterflies and birds, especially cardinals. She and Paul loved to play board games, camp, hike and travel, spending spring breaks in Death Valley and venturing as far as Egypt and Israel. Technology often confounded her but she persisted and used it to stay in touch with her family and friends during the isolation of COVID. She loved her family fiercely, and was an extraordinary grandmother of 8 and great-grandmother of 9 (and counting.) She would fly across the country to help after a birth or drive up I-5 in the middle of the night to babysit a sick child the next morning. She and Paul often traveled hours to glimpse the top of a grandchild’s head in a 5-minute performance, or to watch a sports event in pouring rain. They established yearly family reunions in Sunriver that contained so much laughter, good food and love that adult grandchildren later planned their work vacations around it. Eleanor and Paul moved to Country Meadows Independent Living in Woodburn in 2014, where both performed in the Country Players theater troupe. She resurrected Ruth Buzzy’s old Laugh-In sketch in which an elderly woman clobbers a man with her purse when he sits too close on a park bench. Eleanor and Paul quickly found a new church home at Immanuel Lutheran Church. They supported its Community Meals ministry, which feeds as many as 500 hungry people each week. Eleanor’s survivors include her husband, Paul, of Woodburn; her brother, Ken (Patricia) Vroman of Newberg; daughters Karen (Joel) McCowan of Springfield, Kristy (Jeff) Leighty of Hubbard, Kelly Peden of Hillsboro and Kay (Mark) Passmore of Newberg; Grandchildren Kelsey (Jimmy) Heilman; Keeley (Eamonn) Flynn; Andrew Leighty; Jenni (Sam) Vasquez; Melissa (Jordan) Guffin; Kyle (Amy) Peden; Josue Passmore and Nataly Passmore; Great-grandchildren Josie and Ella Heilman: Jordan and Sophia Vasquez; Bennett and Beverly Peden; Hattie Flynn and Eliza Nordling Guffin. Eleanor was predeceased by her parents, Melvin and Helen Vroman; son-in-law Jeff Peden; and great-granddaughter Bethany Peden. A family Memorial Service is tentatively planned for April 2 at her Woodburn Church. Due to COVID-related safety restrictions, capacity is limited but all are invited to attend/view via ZOOM. A link will be posted here. Instead of flowers, Eleanor’s family suggests donations in her memory to: Immanuel Lutheran Church Community Meals 1026 E. Lincoln Street Woodburn, OR. 97071 To donate online, visit https://woodburnchurch.org. Choose “GIVE” from the first drop-down menu and select “Community Dinner” from the second drop-down menu. Please put “Eleanor Nordling Memorial” in the Note/Memo line so we can thank you.

Longtime Junction City resident Eleanor Nordling died peacefully at a Salem hospital Feb. 12, hours after a major stroke. Her husband, Paul Nordling, their four daughters, a son-in-law and two grandchildren were at her side. Eleanor was born... View Obituary & Service Information

The family of Eleanor Nordling created this Life Tributes page to make it easy to share your memories.