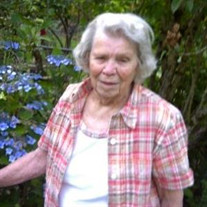 Elva D. Myers, who has lived in Lake Oswego for the last 67 years, has passed away at the age of 97. She was born in Checotah, Okla., to George and Bertha Adams Rigney, the fifth of 12 children in a sharecropper’s family. As a child growing up she helped with the daily care of her brothers and sisters in addition to farm chores. She married Howard Dornan in June 1935. They had two children, Marie and Frank. Unfortunately Howard passed away from typhoid fever in 1939. With two small children in the midst of the Depression, Elva worked hard to support them. This included using her sewing skills, and, at the start of World War II, being a “Rosie the Riveter” for Douglas Aircraft building B-17 airplanes. After the war, she moved to Bakersfield, Calif., to pick cotton with her sister, where she contracted “Valley Fever,” requiring a move to Oregon. While living in the Guilds Lake area in Portland she met and married James Myers. In January of 1949, they moved to Lake Grove where they raised their children, Rod and Carol. They divorced in 1962. During this period, she worked as an industrial seamstress in the clothing and upholstery fields. After her retirement she continued to pursue her favorite pastimes. They included gardening, cooking, reading, genealogy, travel, politics and family. Elva was a fiercely independent, strong-willed, stubborn, staunch Democrat who continued to shop, cook and drive herself until she passed. She was loved by many and will be missed by all. She is survived by her children, Marie (Jack) Potter; Rod (Joan) Myers and Carol (Mickey) Pearson; seven grandchildren; 13 great-grandchildren; six great-great-grandchildren; four brothers and sisters. She was predeceased by her son Frank, granddaughter Jennifer and seven brothers and sisters. A memorial service will be held at 11 a.m. Sept. 26 at Cornwell Wilsonville Funeral Home, 29222 S.W. Town Center Loop E, Wilsonville. The family would like to thank the staff at Meridian Park Hospital and Legacy Hospice. A special thanks to Magdalena and her staff at Le Bela Villa for their care and compassion.

Elva D. Myers, who has lived in Lake Oswego for the last 67 years, has passed away at the age of 97. She was born in Checotah, Okla., to George and Bertha Adams Rigney, the fifth of 12 children in a sharecropper&#8217;s family. As a child growing... View Obituary & Service Information

The family of Elva D. Myers created this Life Tributes page to make it easy to share your memories.