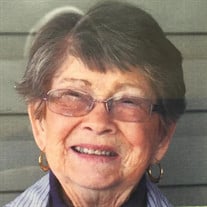 OBITUARY FOR ERNESTINE WOODARD YODER (dod Wednesday, April 26, 2017) Because both had trusted in Jesus Christ as their Lord and Savior, at the age of 92 Ernestine Yoder joined her husband, Vance, in Heaven on Wednesday, April 26, 2017. Ernestine was born into a large farming family (she had nine siblings) on Jan. 22, 1925, to Philip and Sally Woodard in rural Dodge County, Georgia. After graduating from Chauncey High School she went to business college and worked in several office jobs before 1944 when she met her handsome sailor, William Vance Yoder, in Atlanta. She was working there and Vance was stationed there as WWII was winding down. They were married in March of 1945, with a Justice of the Peace presiding and her sisters standing up with them. They spent over 66 years together until Vance’s passing in 2011, giving their whole family an example of faithful, long-haul marriage commitment. Ernestine traveled with Vance to his last Navy billets in New England where their first son, Billy was born. After an honorable discharge from America’s navy, they moved back to Vance’s home farm near Hubbard, Oregon. Vance took over the family farm, they began raising their children, Billy, Cherry and Mickey. Ernestine worked hard as a farm wife and mother, as well as a good neighbor to the folks in the rural Elliott Prairie neighborhood. In 1955 the family moved to Jacksonville, Florida, to be near Ernestine’s family. While in Florida Ernestine had another daughter, Tina Rene. In 1961 the family moved back to the Willamette Valley to Woodburn, Oregon, where they lived for the rest of their 66 year marriage. Ernestine’s love of family was as central to her life as was her Christian faith. She and Vance enjoyed an active retirement full of family, fishing, golfing, traveling, and dancing together. Having courted and married during the 40’s and the “Big Band” era, Vance and Ernestine were excellent, enthusiastic dancers. Their children remember that it was not uncommon when certain songs came on for Mom and Dad to drop everything and just get up and dance! They loved to travel and went on numerous cruises around the world. Ernestine was an avid golfer who played with Vance, as well as with the local ladies, almost every day as long as she was physically able. Ernestine enjoyed volunteering whether it was the PTA or the Woodburn School District, or the Well Baby Clinic, or the Municipal Court, or the County Election board. She was an active member (and often officer) in PEO, the Women’s Golf Club, and the Senior Estates Golf association. She loved flowers and always planted some wherever she lived. Whenever possible there were beautiful fresh flowers on her table. She faithfully read her newspaper every day and worked thousands of crossword puzzles. The two most central aspects of Ernestine Yoder’s life were her faith and her family. Throughout her life she made both the priority. She was committed to her husband, “Bill”, as she called him, as they went through thick and thin together for over 66 years of marriage. She was ever and always a loving sister to all of her 9 siblings, remaining in close contact all her life. There are now only three of the “Woodard” kids left—J.T. Woodard, Trellie Shepherd, and Ann Davis, all still in Georgia. After joining the Yoder clan, she embraced all of Vance’s family as her own. For reunions and potlucks, birthday parties and Christmases, she was “all in”. She was a very social gal and loved to be with people. Her good cooking was famous far and wide, with many of her bowls and dishes marked with “E. Yoder” written on the bottom so they could be returned. Ernestine was a devoted mother to her four children and their children and their children’s children for her entire life. She was the “family hub” where all the family news intercepted. She was always aware and involved in her children’s training, education, marriages, births, accomplishments…in general, their lives. She was a fantastic cook and her home was always a welcoming place and her greatest joys and happiest moments seemed to come from family gatherings and visits. Ernestine’s most long-lasting influence was her solid Christian faith. Having been raised by a godly mother and brought up in a small country church in southern Georgia she accepted Christ as her Lord and Savior as a child and remained faithful to that commitment all her life. Along with Vance, she saw to it that their family knew about Jesus and served Him in a local church. From Elliott Prairie Community church in Oregon to First Baptist in Jacksonville Beach, to Highlands Baptist Church in Jacksonville, FL, to Woodburn Baptist Church in Oregon, Ernestine attended and served. She was a woman of prayer who continually prayed for her family and friends. She often pointed out Jesus as “the way” to God to her children and grandchildren. Her enduring legacy incudes her four children, 15 grandchildren and 17 great grandchildren. Ernestine is survived by her children, Bill Yoder, Cherry Yoder Rosin, Mick Yoder, and Tina Yoder. A Celebration of Ernestine Yoder’s life will be held at 11:00 a.m. on June 16, 2017, at Mid-Valley Community Church in Woodburn, OR.

The family of Ernestine W Yoder created this Life Tributes page to make it easy to share your memories.