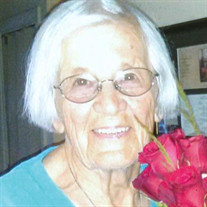 Frances Rogers (Schaff) was born on April 7, 1922 in Glen Ullin, North Dakota to Johannes and Elizabeth Schaff. She was called home on March 26, 2017. She was married to John, the love of her life, for over 60 years until his passing in 2009. She loved to grow her garden and flowers, raise farm animals and precious pets. She especially enjoyed Spring-time when the little lambs would bounce on the giant inner tube that we kids all played in and on. She was the heart of the family and worked hard to feed, cloth and teach her children. Frances believed in God, walked a daily path of faith and served as a role model to her family and all who knew her. She could prepare a meal fit for a king from whatever she had in her cupboards. Frances presided at years of holiday and family gatherings where her cooking skills, especially of German foods, were enjoyed by all. She was very aware of the environment and was the Queen of recycling before it was cool. Worldly things held no attraction for her, rather her joy was in her family, home and time spent together. She made sure everyone was welcomed with warmth and love. Frances and her husband, John loved to spend time in the Bend/Sisters area, the Oregon Coast, and on the Santiam River. They enjoyed taking their grandchildren to these places so they would appreciate them as well. Frances and John spent many memorable times in Hawaii with the family , swimming in the warm waters off Waikiki. Children – Sharon (Rogers) and Don Jackson of West Richland, WA, Garry Rogers of Salem, OR, Patricia (Rogers) and Bill Mowat of Honolulu HI, and Diane Rogers of Woodburn, OR. She leaves a combined total of 75 grandchildren, great-grandchildren, and great-great grandchildren. Viewing is at Simon-Cornwell Funeral Chapel in Woodburn, Oregon from 1-5 pm on March 31st with Rosary immediately following. A Funeral Mass will be held at St. Paul Catholic Church on April 1st at 10:30 am with luncheon served at St. Paul City Hall. Internment will be at Restlawn Cemetery in West Salem Oregon.

Frances Rogers (Schaff) was born on April 7, 1922 in Glen Ullin, North Dakota to Johannes and Elizabeth Schaff. She was called home on March 26, 2017. She was married to John, the love of her life, for over 60 years until his passing in 2009. She... View Obituary & Service Information

The family of Frances Rogers created this Life Tributes page to make it easy to share your memories.