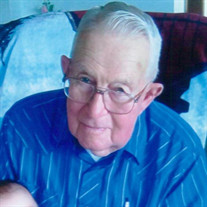 Frederick Livingston Pantle, 87, of Woodburn, Oregon, passed away at home on the family farm on Tuesday, April 6, from cancer. He was born on November 9, 1933, in Encampment, Wyoming, to Charley and Mildred Pantle. The family moved to the family farm 3 miles east of Woodburn in 1946. He graduated from Woodburn High School in 1952. He served in the United States Naval Reserves from 1953 to 1955. He worked in various maintenance roles as an employee of the Oregon State Hospital in Salem for over 34 1/2 years, until his retirement in November 1995. He married the former Nancy Ann Seaton on February 8, 1958. They were married for over 55 years, until she passed away in June 2013. He married Lorraine Smith on February 14, 2015. He enjoyed farming, fishing, hunting, skeet shooting, and spending time with family, especially his 2 grandsons and great-granddaughter. He was also highly skilled in carpentry, electrical work, auto mechanics, and other numerous skills involving working with his hands. Several years ago, he completely restored his father’s old Model T that had been languishing in one of the sheds on the farm. He was also preceded in death by his parents, his sister Vera, and his daughter Darlene. He is survived by his wife Lorraine, daughter Jacqueline and son-in-law Andrew and grandsons Nathaniel and Dorian; his son Dwayne and daughter-in-law Melinie and granddaughter Kelli; his daughter Karen and son-in-law Dan; his grandson Jon and Yesenia and great-granddaughter Eloisa; his grandson Josh; numerous nieces and nephews. He was a member for many years of the Woodburn Christian Church, and later Valley Christian Church in Wilsonville. He and Lorraine most recently became members of Elliott Prairie Church. Visitation was from 1 - 2:30 pm on Thursday, April 8th, at Cornwell Colonial Chapel in Woodburn. A graveside service will be held on Friday, April 9th at 10 am at Belcrest Memorial Park Cemetery in Salem.

Frederick Livingston Pantle, 87, of Woodburn, Oregon, passed away at home on the family farm on Tuesday, April 6, from cancer. He was born on November 9, 1933, in Encampment, Wyoming, to Charley and Mildred Pantle. The family moved to the family... View Obituary & Service Information

The family of Frederick Livingston Pantle created this Life Tributes page to make it easy to share your memories.