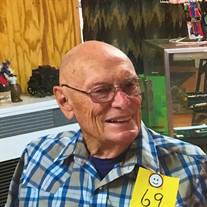 Gary Malcolm Cutsforth, July 6, 1929 (Salem, OR) – December 19, 2016 (Brothers, OR area) Preceded in death by parents Ross and Susie Cutsforth, brother Gael, sisters Iris Chrz and Faye Hood. Survived by wife Dorothy (Hampton) of 69 years, children Arlen (Brenda) of Yuma, AZ., Elaine Hampton of Pampa, TX., Diane Baker (Bill) of Salem, OR, Joan Hoagland (Dave) of Gervais, OR, 13 grandchildren and 21 great-grandchildren, nieces and nephews. Gary graduated from Gervais Union High School in 1947 and married his high school sweetheart, Dorothy Hampton in Independence, OR. (1947) He was raised on a farm north of Gervais but showed no interest in farming. His goal was to be a truck driver. After working in several timber industry jobs, he got his first truck driving job with Coquille Valley Lumber Co. in 1958. In 1961 he purchased his first truck and worked for Mitchell Bros. Truck Lines as an owner/operator and later with Western States and Michigan Pacific, where he made many life-long friends. He retired in 1994 after 36 years and 3 ½ million miles of long-haul driving. He then began wood working, making many items for their own home and furniture for his grandchildren and great-grandchildren. He enjoyed fishing and yearly deer hunting trips to Central Oregon. After his first hunting trip at age 14, he determined he would like to own a piece of the Central Oregon desert someday. In 1997 they found a small ranch NE of Brothers. It’s been their home since 2005 where he loved clearing juniper trees, making firewood, feeding birds, chipmunks and rabbits. He was still active clearing trees and making firewood at age 87. He was an active member of High Country Fellowship Church at Brothers.

The family of Gary Malcolm Cutsforth created this Life Tributes page to make it easy to share your memories.