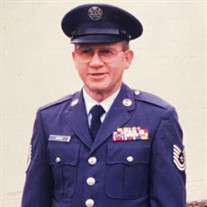 George Marion Hopper August 22,1929 – December 29, 2021 George Marion Hopper passed away on December 29, 2021, at the age of 92 in Woodburn, Oregon. George was born on August 22, 1929, to Hugh and Junia Hopper in Brush, Colorado. On September 9, 1950, he married Stella Mae Buske in Salem, Oregon. They traveled throughout the United States early in their marriage before settling in Woodburn, Oregon in 1966. They had three children, Linda, Steven, and Timothy. George joined the Air Force in 1951 and served fifteen years. After active duty, he joined the Air Force Reserves until retiring. When George moved to Woodburn, he worked for twenty years at the MacLaren Youth Correctional facility as a Cook. He loved to work in the yard and was always planting flowers that Stella would receive for Mother’s Day or her birthday. Exercise was very important to George. He loved to ride his bicycle in the earlier years all around Woodburn. He would either walk each day or go to the gym and did this up until June of this year. George is survived by his son and daughter in law, Steve & Julie Hopper and daughter in law, Nancy Hopper. George was predeceased by wife, Stella Hopper, daughter Linda and son Timothy. He is also survived by eight grandchildren, 20 great grandchildren and three great great grandchildren. Funeral services will be held Tuesday January 4 at 2pm, viewing at 1:30pm. at Simon-Cornwell Colonial Chapel in Woodburn, Oregon.

The family of George Marion Hopper created this Life Tributes page to make it easy to share your memories.