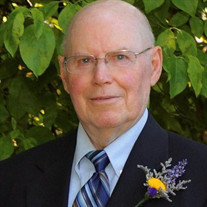 Gerald Lee Green Gerald (Jerry) Lee Green, 90, died of a tractor accident at his home east of Salem, Oregon, Saturday morning, January 2, 2021. He was born November 28, 1930 in Monte Vista, Colorado, to William Oscar and Frances (Lindenmeyer) Green. He attended grade school in Monte Vista. The family moved to Portland, Oregon, where he attended Benson High School for two years. Then the family moved to a farm outside Aurora, Oregon, where Jerry attended, Woodburn High School graduating two years later in 1948. Jerry and Louise (Priest) were married July 6, 1952 at the Priest family home in Hubbard, Oregon. Don Priest, father of the bride, performed the ceremony. The couple celebrated their 68th wedding anniversary in 2020. While still attending high school, Jerry joined the National Guard and after high school he worked for the Priest hatchery and at Alderman farms. He made his career with the Oregon Military Department from 1954-1986 where he performed many different roles. Concurrently, Jerry, Louise and family had a chicken processing business which they ran for over 30 years. After retiring from the military department, Jerry and Louise invested in rental houses. They did all the work of managing, cleaning, repairing, and renting the properties. Jerry and Louise attended Woodburn Christian Church for over 50 years. They moved to Salem in 1999 and began attending West Salem Christian Church. Jerry was very active in the church, in the community, and with his family. For many years he led congregational singing for the Sunday evening church service, sang in the choir, and chaired the missions committee. Through the years he taught Sunday School, chaired committees, and served as deacon and elder. For a few years he served on the North Marion School Board. When his children were still at home he enjoyed spending time with his family camping and fishing in central Oregon. Every summer Jerry, Louise and family would spend time at Wi-Ne-Ma Christian Camp on the Oregon coast – in the early years going to Family Camp but for the last 50 years or so attending the Week of Missions. They also enjoyed Wi-Ne-Ma’s September Fest and the annual Wi-Ne-Ma Fall Auction. For the last 15 years or so the two of them traveled to Desert Hot Springs, California each winter to spend about three months in warmer weather. Jerry gave of himself and his life blood until the end. He had a rare blood type and donated blood to the Red Cross throughout his adult life. He missed his last appointment to donate which was actually scheduled for Saturday morning the day he died. In all, he donated more than 27 gallons of blood, one pint at a time. Many, many friends and family are left to mourn his passing. In addition to his wife, Louise, he is survived by his children: LuAnn (Al) Edmonds of Lebanon, Oregon, Don Green of Ellensburg, Washington, Peggy (Dan) Dinges of Woodburn, Oregon and Patti (Don) Thwing of Aurora, Oregon. Jerry had 10 devoted grandchildren: Krista (Aaron) Wolgamott, Jacob (Rochelle) Edmonds, Rebekkah (Phil) McCaffrey, Kimberly Green, Jessica Green, Emily (Lisanne) Dinges, Katrina (Andrew) Harsha, Allison (James) Eik, Jamie (Amy) Thwing, and Peter (Victoria) Thwing. Seven wonderful great-grand children, Abigail & Cora Wolgamott, Wesley & Jack Edmonds, Vera & Oscar Dinges, and Liam Thwing. Jerry is also survived by his only remaining sibling Marjorie (Doug) Priest of Eugene, Oregon. Jerry Green was a well-loved husband, father, grandfather, and great-grandfather whose Christian character was admired by all who knew him. He was highly respected and lived his life with the utmost of integrity. He will be sorely missed. Yet we know that to be absent from the body is to be with the Lord which is the hope of all who are in Christ.

The family of Gerald Lee Green created this Life Tributes page to make it easy to share your memories.