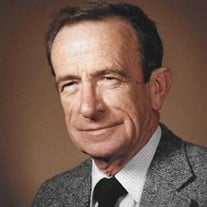 Gerald Edward Reilly August 31, 1928 - May 8, 2017 Gerald (Jerry) Edward Reilly died peacefully on May 8th, 2017, surrounded by family. Together in life and death, he joined his beautiful bride, Rosemary, who proceeded his passing by 11 days. Theirs was an enduring, epic love story that touched all who knew them. Gerald was born in Moscow, ID on August 31st, 1928 to Helen and Edward Reilly. Four years later he was joined by younger brother, James (Jim). Jerry attended Post Falls Elementary, Gonzaga Preparatory School, and graduated from Post Falls High School in 1947. He played football, basketball, and the trumpet. Jerry and Rose met when he was in 8th grade, when his dog bit her. They would play kick the can together with the neighborhood kids, many of whom grew up to be lifelong friends of the couple. Rose and Jerry married in 1949, with his brother, Jim, and Rose's best friend, Virginia, as best man and maid of honor. Jerry worked as vice president of a large mechanical contracting company, which afforded him the opportunity to travel. He later worked for Snohomish County as their Fleet Manager retiring in 1990. The couple moved to Woodburn, OR in 1991 and thoroughly enjoyed golf in their retirement. They continued to travel to Arizona each year to escape the Pacific NW winters and to socialize with their large network of friends. Jerry also loved tending his yard and garden, being an active, devoted grandfather, reading historical novels, watching sports, and enjoying a perfect steak and cold beer. He was an impeccable dresser and a perfect dancing partner for Rose. Jerry is survived by his daughter Karen Jamieson (Dan), grandchildren Ryan Jamieson (Jennifer), Heather Jamieson Sheriff (Foday), Alyse Jamieson, and great grandchildren Amilah Rose, Sam, and Jake. He leaves behind many loving nieces and nephews. Son, Terry Reilly, passed away in 2012. A service will be held for the couple May 20th at Simon-Cromwell Colonial Chapel, 390 N. 2nd Street, Woodburn, OR, at 12pm. Reception to follow at Senior Estates Club House. Donations can be made in his honor to Doctors Without Borders.

Gerald Edward Reilly August 31, 1928 - May 8, 2017 Gerald (Jerry) Edward Reilly died peacefully on May 8th, 2017, surrounded by family. Together in life and death, he joined his beautiful bride, Rosemary, who proceeded his passing by 11 days.... View Obituary & Service Information

The family of Gerald Edward Reilly created this Life Tributes page to make it easy to share your memories.