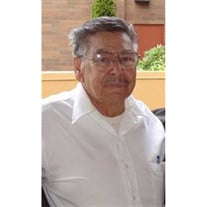 Gerardo N. Soto Friend, Father, Husband, and Son of God. Gerardo was born October 3, 1933 in Durango, Mexico to Pedro Soto and Maria Nava; He passed away, from liver cancer, at his home in Woodburn, Oregon on November 20, 2012 at age 79. Gerardo migrated to the U.S. at age 16 and began working as a fruit picker in the farms and orchards of Texas, Oregon, and California. In 1958 He married Rosa Valdez and started a family of eight; sons Ruben, Ramiro, Gerardo Jr., Valentin, Apolinar, and daughters Lucy, Mary, & Rebeca Soto. In 1959 he settled in Gervais, Oregon where he resided until 1988 when he relocated to Woodburn, Oregon. In 1963 he began working for the Southern Pacific Railroad from which he retired after thirty-three years of service; he was very proud that he missed only two days of work in those 33 years of work. Gerardo remarried in 1983 to Guadalupe De Dios, and son Israel was born that same year. He became step-dad to seven more children; sons Jose, Justo, Renato, Gabriel, & Luis, and daughters Bertha, and Lilia Alvarez. Responsible, well-mannered, and kind, Gerardo's work ethic exemplifies his life: he liked to always stay busy; even through the last days of his accomplished life. Whether working on his cars or maintaining the lawn and his home he loved being a do-it-yourselfer. He became a Christian over twenty years ago and he loved listening to gospel music. His is survived by his wife Guadalupe Soto, his nine children, six step-children, thirty-seven grandchildren, forty-two great-grandchildren, his brother Constantino Nava-Reyes from Texas, and his ex-wife. He is preceded in Heaven by his parents, brothers Nasario Nava-Reyes from San Francisco, CA, and Jesus Nava-Reyes from Chicago, IL, and step-daughter Bertha Gomes from Montclair, CA. May rest in peace the patriarch of the Soto-Alvarez de Dios family.

Gerardo N. Soto Friend, Father, Husband, and Son of God. Gerardo was born October 3, 1933 in Durango, Mexico to Pedro Soto and Maria Nava; He passed away, from liver cancer, at his home in Woodburn, Oregon on November 20, 2012 at age 79. Gerardo... View Obituary & Service Information

The family of Gerardo N. Soto created this Life Tributes page to make it easy to share your memories.