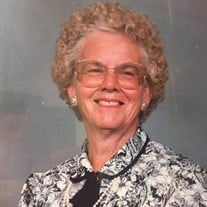 Gertrude (Gert) Christine Borschowa November 29, 1927 – July 1, 2020 Gertrude Christine Borschowa, 92 yrs., passed away on July 1, 2020 in Tualatin, Oregon. She was born at home on November 29, 1927, near Pittsville, Wood County, Wisconsin. Gertrude lived there with her parents and six siblings until the family moved to Silverton, Oregon in 1946. Gertrude was the third child of Joseph and Veronica Gubbles. Gertrude married Joseph (Joe) Borschowa from Mount Angel on January 22, 1949 and resided in Mount Angel until December of 2019 when she moved to Emerald Gardens in Woodburn, Oregon with her cat, O’Malley. Gertrude enjoyed square dancing, working in the woods, reading, and travel. She has traveled to Australia, New Zealand, Canada, Europe, South America, and many of the US states. In 1964, Joe and Gert opened Main Street Garage in Mount Angel and she worked as the bookkeeper for her husband and her son, Joe Jr., until well into her mid-eighties when she retired. Gertrude also managed apartments and worked in the woods until she was in her mid-eighties. Gertrude is survived by her brother, Frank Gubbels, sister, Alice McHugh, and her children and their spouses: Joe (Wendy) Borschowa, Ray (Diane) Borschowa, Rita (Stan) Armstrong, and Larry (Aleta) Borschowa. Gertrude is also survived by nine grandchildren and thirteen great grandchildren and one great grandchild due in August. Gertrude was preceded in death by her husband, Joseph Borschowa, and a grandson, Joseph Armstrong. Funeral arrangements are being handled by Simon Cornwall Colonial Chapel in Woodburn, Oregon. At St. Mary’s Church in Mount Angel on July 10th, a Rosary will be held at 10:30 am, the funeral mass will be held at 11:00 am followed by the burial at Calvary Cemetery. In lieu of flowers, memorial donations may be made to St. Mary’s Church or the charity of your choice.

The family of Gertrude Christine Borschowa created this Life Tributes page to make it easy to share your memories.