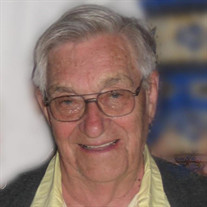 On Saturday July 25, 2020, Gustave W. “Bill” Larson, loving father of two sons and their families, passed away at age 97. Bill was born on April 18, 1923, and grew up in Burlingame, California, the only child of Swedish immigrants, Gustav E. and Alma M. (Bryngelsson) Larson. Bill served in the Pacific Theater during World War II, attaining the rank of Storekeeper First Class in the United States Navy. At the end of the war, while stationed in Los Angeles, he met the love of his life, Eileen T. “Lee” Eisenhart. They were married in Burlingame in 1946. They made their home in San Mateo, California, where they raised their two sons. Bill and Lee both took an active part in their boys’ lives and were proud of both their sons being Eagle Scouts and U.S. Army veterans. Bill and Lee moved to Novato, California in 1967. They were active members of the Novato Squares and enjoyed many cruises and RV outings. Bill was employed by Southern Pacific Railroad in San Francisco for 43 years, from where he retired in 1983 as coordinator of traffic services. The railroad and all things train-related remained a life-long love. After his passing, the family is quite sure that he is on his last train ride home. Upon Bill’s retirement, Bill and Lee built a home on Hidden Valley Lake in Lake County, California, where he enjoyed golf, gardening and social card games. In January, 2003, they moved to Senior Estates in Woodburn, Oregon. After his wife passed later that year, Bill continued to enjoy square dancing and coffee hour socializing at Senior Estates. In his later years, he appreciated the devoted care he received at Cascade Park in Woodburn and The Springs Living at Wilsonville retirement care facilities. Bill is predeceased by his parents and his wife. He is survived by his two sons, L. William Larson (Janet) of Knoxville, Tennessee and Ronald G. Larson (Dona) of Wilsonville, Oregon; five grandchildren, Erik Larson (Heather) of Los Angeles, California; Dr. Viktoria Davis (Steven) of Madelia, Minnesota; Kari Larson of Salt Lake City, Utah; MAJ Angela Batastini (Scott) stationed in Bellevue, Nebraska and Bethany Ackiss (LTC Jon) stationed in Reichenbach-Steegen, Germany; and nine great-grandchildren. Interment will be next to his wife in Valley Memorial Park, Novato. Family services will be held at a later date.

The family of Gustave "Bill" Larson created this Life Tributes page to make it easy to share your memories.