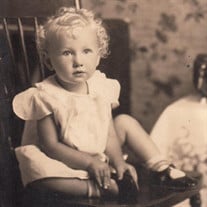 Joyce was born in Myrtle Point, Oregon, the eldest of the four children of Jesse Walker and Lorma Marcelle Stallard. Growing up in Powers, Oregon she had a large family, and was the first born of the eighteen grandchildren of William Martin and Lelia Maude Stallard. In 1950 she married Calvin Ruttencutter, and their four children were born in Myrtle Point. The family moved to Napa, California in 1959, where Cal went to work at Mare Island Naval Shipyard. Joyce stayed very busy with four children, many friends and her membership in Beta Sigma Phi. During this time they built a home in a walnut orchard near Yountville, which was a great place to live and grow, and for many holiday gatherings with friends and family. Joyce and Cal purchased a home in Eugene in 1983 to be near the growing family, and close to extended family. Grandchildren were being born, and were much loved. Many celebrations ensued. They traveled and played golf. They moved to Senior Estates in Woodburn in 1988. It was perfect for playing golf, socializing, being a Red Hat, playing cards and Bingo, and traveling. Calvin passed in 2003; Joyce remained very active with the golf club for many years. Her last years were at Country Meadows Village. She worshipped at the Woodburn Christian Church. She was preceded in death by her parents, husband Calvin Ruttencutter, brothers Robert Walker and William Walker. Survivors include her children: Jacky Thompson and husband Mike of Portland, Karen Ewing and husband Ron of Woodburn, Calvin Ruttencutter, Jr. and wife Gina of Mesquite, Nevada, and Kevin Ruttencutter and wife Dawn of Harvest, Alabama. She is also survived by her sister, Dorothy Alawine of Napa, California and Sister-in-Law, Denyce Walker of Lebanon. Her dearly loved grandchildren (who called her Grandma Juice): Jennifer (Eric), Rachel, Keith (Kailey), Jamison (Samantha), Nic, Emily (Rorie), Juliana (Adam), and Cody. Her great grandchildren and several nieces and nephews. Arrangements have been made at Simon-Cornwell Colonial Chapel in Woodburn. Interment will be at Sunset Memorial Park, Coos Bay on Saturday July 9th at 11:00 a.m.

Joyce was born in Myrtle Point, Oregon, the eldest of the four children of Jesse Walker and Lorma Marcelle Stallard. Growing up in Powers, Oregon she had a large family, and was the first born of the eighteen grandchildren of William Martin... View Obituary & Service Information

The family of Helen Joyce Walker Ruttencutter created this Life Tributes page to make it easy to share your memories.

Joyce was born in Myrtle Point, Oregon, the eldest of the four...