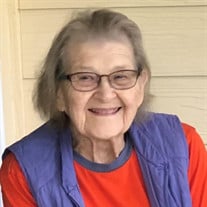 Irene Virgina Makowski, 92, of Woodburn, OR, passed away in the early hours of April 1, 2021 in her home. She was born in Lackawanna, New York, on April 19, 1928, daughter of the late Francis Adamowich and Ana Dziedzic Adamowich. She was preceded in death by her husband of 54 years, Walter Makowski, son Ronald Makowski, grandson Ryan, 3 great-grandsons: Nikolas, Trace, and Jackson, her parents, 5 brothers and 1 sister. She is survived by her children Bruce (Marcia) Makowski, William (Dorlene) Makowski, Patricia (Craig) Weygandt, Bradley (Lisa) Makowski, Daniel (Pam) Makowski, and Scott Makowski; as well as her sister Alice Loftus, 18 grandchildren, 43 great-grandchildren, and 1 great-great-grandchild. Virginia grew up in Western New York. She graduated from Bliss high school and later that year was married to the love of her life, Walter D. Makowski in 1947, and together they had 6 sons and 1 daughter. They raised the family on their dairy and poultry farms in Western New York, before moving to Dade City, Florida, and subsequently to Woodburn, OR in 1986. After the loss of her beloved Walt in 2001, she continued to be the strong matriarch for her large family. She was the glue that bound her family together, especially in times of trial. The assistance, devotion, and companionship of her son Scott allowed her to remain in her home. Virginia had a love of music, in high school played cello, and is remembered fondly by her children for her singing while doing chores around the home. Virginia and Walter loved to dance, and they turned heads while dancing together at weddings and receptions, especially the Polka. Virginia was an avid reader, loved to play Scrabble and Pinochle, and was unbeatable at both. She encompassed love, wisdom, patience and empathy. She was firm in her beliefs and had a quiet strength that demanded respect. She had a depth of wisdom that only few can boast, yet she was overflowing with humility. Virginia was a communicant of Holy Trinity Old Catholic Church in Canby, OR, and was strong in her faith and belief in our Lord and Savior Jesus Christ. With a heart filled with love and compassion, her empathy and depth of devotion to her family and friends were beyond measure. She is deeply loved and will be missed. Visitation for Irene Virgina Makowski will be on Wednesday April 7th from 4pm-7pm at Simon Cornwell Colonial Chapel in Woodburn, OR. Following a small family service, there will be an open graveside service at Mt Zion Cemetery in Canby Oregon on April 8th at 11:30 am. In lieu of flowers, donations in Virginia's memory can be made to: Holy Trinity Old Catholic Church, 117 NE Third Ave, Canby, OR 97013 or SVDP Stella Maris House Women's and Children's Shelter Friends of Stella Maris, PO Box 3057, Bremerton, WA 98310

Irene Virgina Makowski, 92, of Woodburn, OR, passed away in the early hours of April 1, 2021 in her home. She was born in Lackawanna, New York, on April 19, 1928, daughter of the late Francis Adamowich and Ana Dziedzic Adamowich. She was preceded... View Obituary & Service Information

The family of Irene Virginia Makowski created this Life Tributes page to make it easy to share your memories.

Irene Virgina Makowski, 92, of Woodburn, OR, passed away in the...