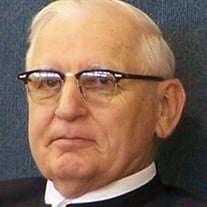 The earthen vessel known as James Christian Roth began breathing on his own on September 12, 1934. He was the fourth of seven children and the first of three sons of Jacob and Mary (Buckwalter) Roth. Jesus joined James in his earthen vessel... View Obituary & Service Information

The family of James Christian Roth created this Life Tributes page to make it easy to share your memories.