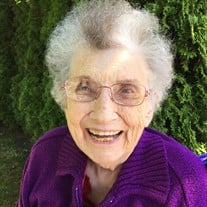 Jeanne E. Hobbs Jeanne Elizabeth (Owens) Hobbs was born in San Mateo, CA February 27, 1927 and died in Woodburn, OR September 24, 2017 at the age of 90. Jeanne was born in San Mateo, California to Vera Elizabeth (Burget) and Westley H. Owens (alias Job). At birth she was given the name Betty Jean, but no one ever called her that and she had it legally changed later in life. Shortly after birth, they moved to The Dalles, Oregon where she and her younger sister were raised by their mother and maternal grandmother. When she was in high school, they moved to Portland, Oregon and she graduated from Jefferson High School. Then she started nursing school at the University of Portland. Jeanne met Gordon Hobbs in 1946 when he was on leave from the Navy. They were married October 12, 1947. She had to quit nurses training because at that time nurses could not be married—they changed the rules shortly after that. They raised their family in southwest Portland. She was at home raising her children for many years. During that time she volunteered at Markham Elementary, Wilson High School and Jackson High School. She was the elementary school classroom photographer and took classroom pictures that she offered to families for a quarter—maybe the first school photographer? She was a Blue Bird and Camp Fire leader. She was active in the PTAs, including holding many jobs at both levels. She was on the Altar Guild at St. Barnabas Episcopal Church in Portland. She volunteered at election sites and was in the Garden Club. Later she worked for Caffee Automotive in Beaverton, Multnomah Bank, and finished her career as the manager of the proof department at U. S. Bank in downtown Portland. She retired in 1991. She loved all holidays and the family and friends that would gather. She loved the hullabaloo and noise, lights, decorations, color, and activity. She was always entertaining. She loved life. Jeanne is survived by her five children and their spouses; son, Stanley (Jenny), daughters: Barbara (R. Ed), Margaret (M. Jim), Mary (Bernie), and Alice (Chuck); 17 grandchildren and 22 great grandchildren. Gordon preceded her in death in 2000. Disposition was by cremation. She will be interred with Baboo (Gordon) at Willamette National Cemetery in Portland. Family will gather for a life celebration of the legacy she left. No other services are planned. Donations may be made to Doernbecher Children’s Hospital 1121 SW Salmon, Suiite 100; Portland, OR 97205 or a charity of your choice. Arrangements by Simon-Cornwell Colonial Chapel www.cornwellcolonial.com

The family of Jeanne Elizabeth Hobbs created this Life Tributes page to make it easy to share your memories.