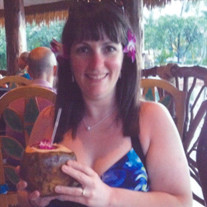 Jessica Lynne (Bergstrom) Tautfest was born in Portland, Oregon one day after Halloween on November 1st in 1973. She passed away unexpectedly at the age of 44, from the results of a ruptured brain aneurism early Wednesday morning on September 5, 2018 at Kaiser Sunnyside Hospital in Clackamas, Oregon. Jessica graduated from Tigard High School in Tigard, Oregon in 1991. After working a few jobs following high school, she found her long-term professional home at Chown Hardware in Portland, Oregon. She loved her job and considered the Chown family and her co-workers to be her extended family. Perhaps due to her birthday, she always loved Halloween and went to great lengths to decorate the house for the holiday. But she also just loved holidays - Christmas, St. Patrick’s Day, birthdays and any excuse to celebrate. She loved the outdoors and camping, hiking and traveling were some of Jessica and Tony’s greatest pleasures. Jessica was preceded in death by her Father, Dennis Thomas Bergstrom, her Father-in-Law James Alvin Tautfest, and all of her paternal & maternal grandparents. She is survived by her husband Anthony “Tony” Tautfest, sons Jacob and Kellen and daughter Pamela; Sister Jan Johnson (Scott), Brother David Bergstrom; Brother-in-Law Charles “Chuck” (Susan), Mother Dawna (Shiflett) Bergstrom; Mother-in-Law Janice (White) Tautfest ; Nephews and Nieces Jacob, Jesse & Trace Johnson, Cathan and Bryce Tautfest in the U.S. and Noah, Imogen, Monique, and Matilda in Australia; as well as their two “four-footed girls” Ginny and Brandy. In lieu of flowers donations can be made in remembrance of Jessica Tautfest, to the Society for The Protection of Animals, or any other charity of their choosing. Arrangements entrusted to Simon Cornwell Colonial Chapel in Woodburn www.cornwellcolonial.com. Celebration of Life will be held at Champoeg State Park in the main Pavilion Friday September 21st at 4pm.

Jessica Lynne (Bergstrom) Tautfest was born in Portland, Oregon one day after Halloween on November 1st in 1973. She passed away unexpectedly at the age of 44, from the results of a ruptured brain aneurism early Wednesday morning on September... View Obituary & Service Information

The family of Jessica Lynne Tautfest created this Life Tributes page to make it easy to share your memories.