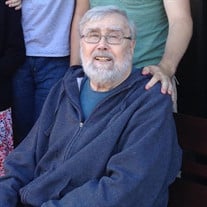 Dr. John E. Lloyd September 28, 1940 to March 25, 2017 John E. (Jack) Lloyd was born in Homestead, Pennsylvania on September 28, 1940 to the late Earl Edward and Elizabeth Flynn Lloyd. His childhood was spent in Pennsylvania where he graduated from Munhall-Homestead High School and went on to earn a bachelor of science degree in Zoology from Penn State University. While interning at Penn State he met and married his loving wife Deanna (Dressler) Lloyd. He then attended Cornell University in Ithaca, New York where he earned his PhD in Toxicology. There, a daughter, Gwen (Lloyd) Johnson was born and several years later a son John E. Lloyd Jr. was born. Jack was an accomplished professor of livestock entomology and parasitology in the college of agriculture at the University of Wyoming. In his nearly 44 years of service he was a mentor to many graduate students and sponsored and creatively funded the Lloyd-Kumar scholarship in Entomology. He worked closely with The Wyoming Wool Grower’s Association and Wyoming Stock Grower’s Associations. He was an active member of the Entomological Society of America (ESA), The Livestock Insect Workers Conference (LIWC), and The American Veterinary Medical Association. He was awarded the LIWC Lifetime Achievement Award in Veterinary Entomology in 1999. When his children were young Jack was active in scouting, serving as the Pack Master of Packs 133 &134 of Laramie, Wyoming for numerous years. He also helped with Campfire Girls and Job’s Daughters and later advised for the Laramie Chapter Order of DeMolay where he was awarded the Chevalier. Jack’s hobbies included spending time with his family, trout fishing, traveling, and miniature railroading. He was also a creative man and some of the most treasured memories are from Halloween and Valentine’s Day when the family spent time constructing elaborate costumes and mailboxes from household materials. Jack is survived by his wife Deanna of Oregon; Children, Gwen Johnson (Alan Johnson) of Oregon and John Lloyd Jr. (Laura Lloyd) of Minnesota; Grandchildren, Cameron and Jeana Johnson (Cameron Mountain) of Oregon; Catherine Nelson (Jeremy Nelson), Thomas, Derek, and Kenny Lloyd of Minnesota; Great Grandson, Markus Nelson of Minnesota; Sister, Betty Jean Wallace of Pennsylvania, and numerous cousins, nieces, nephews and dear friends. A private family service was held. Memorials may be sent to the American Lung Association in memory of Dr John E. Lloyd.

The family of John "Jack" Edward Lloyd created this Life Tributes page to make it easy to share your memories.