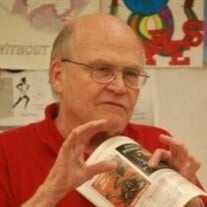 In the presence of his wife and children, John Warren Welch, 79, died a happy and peaceful death, at home, a year after being diagnosed with esophageal cancer. Born in Willmar, Minnesota to Warren John "Jack" and Marion Ruth "Bobby" Welch, the younger of two sons, John was a star athlete at Marshall High School in Minneapolis. He played football at St. Cloud State University earning a B.S. Social Studies in 1966 and M.S. History in 1972. John served in the Army Reserve of Minnesota from 1960 to 1966. Upon graduation from SCSU, John began his teaching career in Albany, Minnesota. Two years later, he and his first wife, Kathleen, moved to Canby, Oregon for a better climate. They had two daughters. In 1978, he married Christine Belleque and they had a daughter and two sons. John began his legendary 38-year career at Gervais High School in 1968 as a respected teacher, coach, and colleague. Generations of students looked forward to his classes where he made a positive impact on many, many lives. The most important things in John's life were his wife and family. He especially enjoyed inventing games and amusements to play with his children and grandchildren, attending their activities, encouraging their talents, and seeing their successes. Each year, he looked forward to getting the backyard pool ready and setting up the trampoline. As a beloved husband, father, grandfather, uncle, and in-law, John will be greatly missed. John was predeceased by his brother Gerald "Jerry" Welch. He is survived by his wife Christine, his children Rebecca (Brian) Malcom, Suzanne (Norm) Kasch, Jennifer (Nick), Robert and Daniel, 11 grandchildren, sister-in-law Janice Welch and a large, dearly held, extended family. Rosary service will be at 7:00 pm, Monday, May 10, and Funeral Mass will be at noon Tuesday, May 11 both at Sacred Heart Catholic Church, Gervais, Oregon. Vault interment will be at St. Louis Cemetery, St. Louis, Oregon following the Funeral Mass. A Celebration of Life is planned for a later date. Charitable contributions may be made to Gervais High School, Sacred Heart School, or a school of your choice.

In the presence of his wife and children, John Warren Welch, 79, died a happy and peaceful death, at home, a year after being diagnosed with esophageal cancer. Born in Willmar, Minnesota to Warren John "Jack" and Marion Ruth "Bobby" Welch,... View Obituary & Service Information

The family of John Warren Welch created this Life Tributes page to make it easy to share your memories.

In the presence of his wife and children, John Warren Welch,...