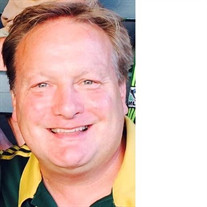 DOB 12-30-66 DOD: 7/21/17 Johnathan “Jon” Charles Gail of Wilsonville, Oregon passed away suddenly on July 21, 2017 at the age of 50 of a heart attack. He was the beloved husband of Bonnie and father of Ethan, Owen and Miles. Jon was born in Hillsboro, Oregon on Dec. 30, 1966 to Thomas Andrew Gail and Juanita Emma Hall. He grew up in Sherwood and Newberg and attended Central Elementary School, Rene Jr. High and Newberg High School where he acted in various theater productions, played soccer and served as student body president. In college, while studying Urban Planning and Political Science at UC San Diego, Jon met the love of his life, Bonnie Rosen and they were married in San Francisco on July 2, 1995. Jon had a passion for helping people and used his speciality in urban planning to focus on housing. He worked for Oregon Housing and Community Services in Salem, was a housing specialist at Portland Development Commission and was the Community Relations Coordinator for the City of Wilsonville. He started his own web-based business called FirstHomeAdvisor.com to help first-time home buyers navigate the steps involved in purchasing a home. Jon loved spending time with his family and friends. He had a special light that drew people in-- he made friends everywhere with his easy going manner, great sense of humor and genuine kindness. Soccer was his true passion-- he regularly attended Portland Timbers games where he was a member of the Axe Society, coached all three sons’ soccer teams, and played in adult league games. Further passions included skiing, fly fishing, hiking, community service and traveling. He loved his cabin in Marion Forks where so many special times were spent with the people he loved. Jon is survived and will be greatly missed by his wife Bonnie, his three children Ethan, Owen and Miles; his father Tom Gail and wife Anne Gail; his mother Juanita Hall and husband Ross Hall; his brothers Barnes P. Gail, G. Harvey Gail (wife Mary Louise), Andrew T. Gail (wife Erin) and Peter Gail (wife Ellie); step sister Annabel Toren and step brother Nick Toren, in-laws Melvin and Ellen Rosen and many nieces and nephews. A service to remember Jon’s extraordinary life will take place on Monday, August 7, 2017 at 10:00 am at Wilsonville Memorial Park, River Shelter, located at 8100 SW Wilsonville Rd in Wilsonville, OR. In lieu of flowers, to honor Jon’s passion for helping families find affordable housing, donations can be made in Jon’s name to Habitat for Humanity of Oregon at PO Box 11452 Portland, OR 97211. In addition, the family has set up a college fund for Jon’s sons at Bank of America. Donation checks can be written to: Ethan, Owen & Miles Gail, and sent to The Gail Family c/o Harvey Gail at PO Box 135, Salem, OR 97308. A special thank you to the City of Wilsonville for their support and to the Portland Timbers for bringing so much fun into Jon’s life and the lives of soccer fans everywhere.

The family of Johnathan Charles Gail created this Life Tributes page to make it easy to share your memories.