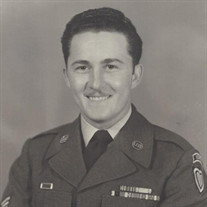 Joseph Louis Larko March 20, 1929 – January 24, 2022 On the wings of a Dove, Joe entered heaven suffering complications from lymphoma, at the age of 92. Joseph Louis (Salvi) Larko was born in Royal (Tower Hill #1), Pennsylvania March 20, 1929 to Michele (Calvanese-Salvi) and Teresa Apicella; immigrants from Italy. Entering military service at the age of 16 he is a Veteran of three wars; WWII, Korean Conflict, and the Vietnam War; where he was exposed to Agent Orange. Serving our country in the Army as a cook, then re-enlisting with the Air Force for 21 years retiring as a Master Sargent Jet Engine Technician. After retirement he served the United States Post Office as a letter carrier for 19 years until medically discharged. From Joe’s earliest years on up he enjoyed playing intermediate baseball as a pitcher, fishing with his friends and family, working in his wood shop, raising chickens, BBQ’s, and his vegetable gardens. He was kind and generous always putting others first, a devoted and wonderful husband, father, grandfather and great grandfather. While stationed in Portland, Oregon, Joe met his greatest love; his wife “bug” June Ruth (nee Singer). They were married March 19, 1952 in Aurora, Nebraska; then together for 45. His affection for his daughters, family, and friends came next. Joe is survived by his younger sister Theresa Larko (Uniontown, Pennsylvania), daughters Katherine Johnson (Portland, Oregon) and Candy (Steve) Canutt (Woodburn, Oregon), granddaughters Dianna Ezzell (Boise, Idaho), Andrea (Curt) Lane (Omaha, Nebraska), great grandchildren, Dara, Kadin, Gavin, Jordin and Tarin. Proceeded in death by his parents, four sisters, brother and wife June. A private service will be held at Belle Passi Cemetery where he will be interned with his wife with a full military honors ceremony.

The family of Joseph L Larko created this Life Tributes page to make it easy to share your memories.