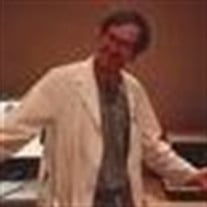 Joseph Martin Weresch, M.D. April 29, 1948 - March 3, 2019 Joseph Martin Weresch, M.D., was born April 29, 1948 in Chicago and died from Parksinson's March 3, 2019 in West Linn. He was preceded in death by his parents, Gay Starrak and Joseph Michael Weresch. He grew up in Lombard, Ill. He earned his master's degree in mathematics at Northern Illinois University. He married Sandy Marsili in 1974 and worked as an actuarial analyst at State Farm before entering medical school at Southern Illinois University School of Medicine. He completed his fellowship in hematology/oncology at the University of Iowa. Joseph worked as an oncologist at Dubuque Internal Medicine in Iowa, Willamette Hematology/Oncology, Oregon Hematology/Oncology Associates and Pacific Medical Center in Seattle. He retired in 2013. Joseph traveled the world, hiked, climbed mountains and was an avid movie buff. He loved to run, play racquetball and ping-pong and enjoyed going to the ocean. He was a compassionate doctor and wanted the best for his family, always wanting to have a positive impact on people's lives. He is survived by his former wife, Sandy Marsili; his daughter, Lindsey, her children, Kaden and Layla Goldberg; his sons, James and Andrew Weresch; and his daughter-in-law, Kristine; his surviving brothers are, Mike and Bill Weresch. A memorial will be held at 11 a.m., April 6, 2019, at Cornwell Wilsonville Funeral Home with a celebration to follow at McMenamins Wilsonville Old Church & Pub. He will be laid to rest in River View Cemetery at a later date. Donations made in lieu of flowers to: Parkinson's Resource of Oregon, parkinsonsresources.org

The family of Joseph Martin Weresch M.D. created this Life Tributes page to make it easy to share your memories.